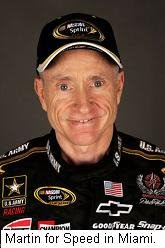 Since taking over for the released AJ Allmendinger four races ago, Speed has recorded an average finish of 34.2, including a 40th yesterday in Phoenix. The team has fallen out of the Top-35 in owners’ points, now trailing the Michael Waltrip Motorsports #47 team by 16 points with one race to go in the battle for the 35th position in owner points. An official announcement is expected from the team later this afternoon.

Martin enjoys a long relationship with Red Bull General Manager Jay Frye, for whom he drove at the former MB3/Ginn Racing. He ran his final scheduled race for Dale Earnhardt, Inc., yesterday in Phoenix, and will move to Hendrick Motorsports in 2009. His arrangement with Red Bull Racing is for one race only, and will have no impact on the team's long term plans wit Speed.

BDR/GEM Merger Off: Team owner Bill Davis said this weekend that a possible merger involving his Sprint Cup Series team has fallen through.

Widespread reports in recent weeks had Davis negotiating with Gillett-Evernham Motorsports majority owner George Gillett about a merger or outright purchase of Bill Davis Racing’s Cup operation, with a possible move by Gillett-Evernham to the Toyota camp. Sources told Sirius Speedway this weekend that Gillett has been unable to secure financing for the deal, and that talks have now stalled.

Davis did not comment specifically on a rumors of a merger with GEM, but admitted that he thought he had a potential merger done recently, only to have it fall through. 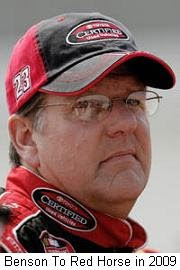 In a related story, sources close to Bill Davis Racing say that NASCAR Craftsman Truck Series point leader Johnny Benson will move to Red Horse Racing next season, taking the majority of his current team -- and possibly his sponsor – along with him. Benson will race as a teammate to David Starr, reportedly with the backing of Benson’s current sponsor, Toyota Certified Used Vehicles. The NASCAR Craftsman Truck Sderies point leader has declined to comment on his future plans recently, saying only that he will not return to BDR in 2009, and has contemplated retirement.

However, multiple sources close to the team say that crewchief Trip Bruce has already cleaned out his desk at BDR in anticipation of a move to Red Horse, which is co-owned by Tom Deloach and NASCAR On FOX commentator Jeff Hammond. Starr will reportedly run a full schedule for Red Horse in 2009, with backing from Zachry Holdings, Inc., which joined the team last month.
Posted by Dave Moody at 2:06 PM