It's Official: Pemberton Out, Richert In at DEI 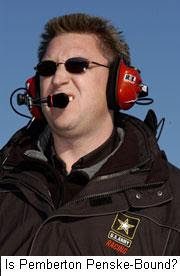 DEI General Manager John Story confirmed the move, saying, "Ryan is immensely talented, and has always been sought-after. He's now chosen to pursue some of those opportunities, and we wish him nothing but the best." Unconfirmed reports have him headed to Penske Racing as crewchief for rookie Sam Hornish, Jr. Pemberton spent eight years with MB2/Ginn Motorsports, moving to DEI when Ginn sold his team to Teresa Earnhardt last season.

Johnson Inks Nationwide Slate: Lowe’s and Hendrick Motorsports announced today that Jimmie Johnson will drive the No. 5 Lowe’s Chevrolet in three Nationwide Series races next season; at Lowe’s Motor Speedway on May 24 and Oct.10, and at California Speedway on Aug. 30. Johnson has just one Nationwide Series win in 87 starts; that coming at Chicagoland Speedway in 2001.

ISC Announces Losses: Motorsports Authentics will lose between $45 and $50 million this year, according to a financial report released yesterday by International Speedway Corporation.

Motorsports Authentics is a 50-50 partnership between ISC and Speedway Motorsports, and produces NASCAR-related licensed products and souvenirs. ISC Chief Financial Officer Susan Schandel said she expects the company to break even in 2008, and blamed this year’s disappointing numbers on Dale Earnhardt Jr.'s May announcement that he would leave Dale Earnhardt Inc., along with other driver moves that were announced earlier than usual.

Schandel said she expects better sales in 2008, as fans gobble-up products featuring the new driver/team combinations. Motorsports Authentics will decrease the number of at-track merchandise trailers this season, and use what she called “a more targeted apparel strategy.” The company has already laid off more than 20 percent of its staff, and has changed a number of operational procedures.

Justice Ain't Cheap: As part of ISC’s financial update, it was revealed that the company spent approximately $6 million to defend the Kentucky Speedway antitrust lawsuit this year, and expects to spend another $5 million to $6 million in 2008. The case is scheduled to go to trial in March, though the presiding judge has urged both sides to return to the negotiating table.

In other Truck Series news, sources say four drivers are in the running to replace the departed David Starr in the Circle Bar Racing #10 Ford; Brendan Gaughan, Bobby East, Clay Rogers and Bradley Riethmeyer. Gaughan is easily the most experienced of the four, but East is believed to have the support of Ford Motor Company.

Herm TV?: A Texas-based company has announced plans to develop a reality TV show around the life of NASCAR driver and television commentator Kenny Wallace. Reality Racing has signed a non-binding development agreement with Wallace, with the intent of developing a reality-based programs.

A press release said the company will also “initiate an aggressive multichannel program of sponsor and investment outreach such that Kenny Wallace's annual racing needs will be entirely met for the 2008 Nationwide season."
Posted by Dave Moody at 11:30 AM