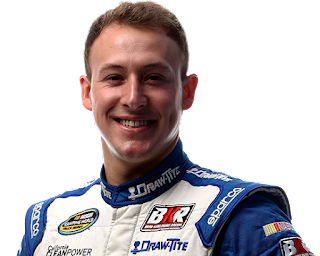 Blue Gate Bank has announced a new partnership with Daniel Hemric, driver for Brad Keselowski Racing in the NASCAR Camping World Truck Series. Blue Gate Bank will be the primary sponsor of the No. 19 Ford F-150 beginning with today's Pocono Mountain 150 at Pocono Raceway.
"To celebrate our inception and to bring recognition to having received regulatory approval in November for our new bank, we've entered into this partnership with Daniel and BKR," said Blue Gate Bank founding Chairperson Molly Gallaher-Flater.
For the Pocono race, the No. 19 will feature a one-time only special electric blue and vivid fuchsia paint scheme commemorating Blue Gate Bank's founding. Blue Gate Bank is just the fifth new bank formed in the United States since the 2009 financial crisis.
"We are a unique financial institution and this opportunity is a unique way to establish our identity. We are pleased to be with BKR and Daniel in NASCAR," Gallaher-Flaters added.
"Blue Gate Bank is coming onboard at a very exciting time, and I'm sure we will electrify fans this weekend with the No. 19 Ford F-150," said driver Daniel Hemric. In his second Truck Series season  Hemric is in a tight race to qualify for the NCWTS Chase. He stands third in the NCWTS standings and sixth on the Chase grid following the most recent race at Eldora Speedway.
"We are pleased that Blue Gate Bank has decided to use Brad Keselowski Racing and the No.19 Ford F-150 driven by Daniel Hemric to introduce their new bank," said BKR general manager Jeremy Thompson.  "NASCAR Camping World Truck Series racing is a great platform to bring awareness to a new company's brand."
Blue Gate Bank will also appear as the primary sponsor on the No. 19 Ford at Bristol on Aug 17, New Hampshire on Sept. 24, Las Vegas on Oct. 1, Martinsville on Oct. 22, Texas on Nov. 4 and Phoenix on Nov. 11.
Posted by Dave Moody at 9:37 AM No comments: 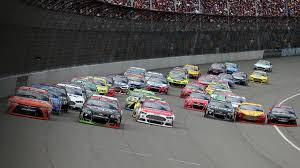 NASCAR has unveiled its  aerodynamic package for the NASCAR Sprint Cup Series Pure Michigan 400 at Michigan International Speedway on August 28.

NASCAR debuted a lower downforce (and less sideforce) aerodynamic package at the two-mile track for the FireKeepers Casino 400 earlier this season. It was met with rave reviews from the drivers, media and fans. Teams will return with the same package for the Pure Michigan 400 in August.

“We have talked to our community, that includes the drivers, the teams, the owners, the OEMs and we all arrived at the decision that we thought it would be a good thing to go back to Michigan with the Michigan 1 package for several reasons,”said NASCAR Senior Vice President, Innovation and Racing Development Gene Stefanyshyn. “One is that it will help us to manage corner speeds better. There was some discussion on tweaking the package, but where we all landed on that is we thought it was best to proceed with the package we ran at Michigan 1 because the teams have some knowledge on that. And a lot of the teams believe they still have some fine-tuning they can do on that package.”

NASCAR has made updates to the 2016 aerodynamic package to further reduce downforce and sideforce. They include welded truck trailing arms, new brake cooling rules, a reduction of skew-generated sideforce by setting rear toe to zero degrees and aero package tweaks to reduce aero generated downforce and sideforce. In addition, rear spoilers will be shortened from 3.5 inches to 2.5 inches and splitters reduced to two inches, with deck fins resized to match the spoilers. 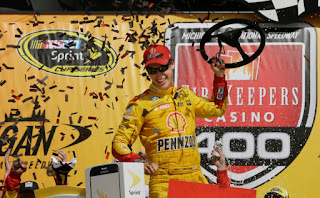 The FireKeepers Casino 400 featured 14 lead changes among eight drivers, with a  margin of victory of less than a second. Drivers and fans were entertained by the new package, especially on restarts.

“You know, I think that thrill, the adrenaline that you get by controlling something that's out of control,” FireKeepers Casino 400 said winner Joey Logano after the race. “A lot of times being right on that edge of backing it in the fence which we saw happening in qualifying and you're just right on that edge. I remember after qualifying I was walking into the media center here and I was signing an autograph and my hand was shaking. I couldn't even write my name. That's cool. That's how on edge you have to be to go fast, and it was like that for 400 miles today, you know, that you're just right on that ragged edge, and that's awesome.”

“We had an amazing race in June for the FireKeepers Casino 400 with the aerodynamic package that NASCAR implemented,” said MIS track president Roger Curtis. “I have loved what NASCAR has done with the lower downforce rules this year, it has made for some exciting and entertaining racing. I am excited to see the teams return for the Pure Michigan 400 with the same package they used in June.

“I applaud NASCAR, teams, and drivers working together on increasing competition and continually improving the sport for our fans. These changes put even more back in the hands of the drivers. With our high speeds and wide track at MIS, the racing in August should be fantastic. I cannot wait for the Pure Michigan 400.”
Posted by Dave Moody at 2:28 PM 1 comment:

With rising stars like Austin Dillon, Kyle Larson, Joey Logano and Sunoco Rookie of the Year contenders Chase Elliott and Ryan Blaney, there are currently five drivers in the Top-20 list who are 26 years of age or younger.
With six Top-5 finishes and two poles this season, Elliott continues to be one of the top three drivers in sales increases each race weekend, and ranks fourth overall in full-time driver sales. Elliott’s sales have nearly quadrupled in his rookie year, making him the youngest driver in NASCAR Sprint Cup Series history to rank among the Top-5 in trackside merchandise sales. Blaney is now a Top-20 selling driver, as well, in the iconic No. 21 Wood Brothers Ford Fusion.

"I see more fans wearing No. 21 gear than ever before and it’s cool to see them cheering on our team," said Blaney, driver of the No. 21 Ford Fusion. "There is nothing like seeing someone wearing your shirt or your hat and knowing they bought that because they are a fan. And the Trackside Superstore makes it an easy, one-stop shop for everyone to find your gear. It’s been a great addition to our sport."

Fanatics has capitalized on defining moments from Kyle Busch, Martin Truex Jr. and Tony Stewart; all of whom have positive sales trends in 2016. Busch has seen a gain of nearly 80 percent in sales since his comeback last summer and subsequent championship run.

New Book Chronicles The Life Of The Late Ron Bouchard 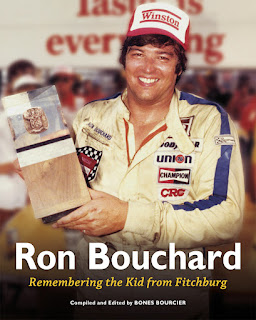 Motorsports publisher Coastal 181 has announced the upcoming release of “RON BOUCHARD: Remembering the Kid from Fitchburg,” compiled and edited by Bones Bourcier. The book will first be available at a book-signing event at Thompson Speedway, in conjunction with the return of the NASCAR Whelen Modified Tour for the Budweiser “King of Beers 150” on August 10. Bouchard was 1978 Modified champ at Thompson and also claimed 37 wins at the storied venue, more than any other track at which he raced.

Bouchard stepped into the spotlight at a young age, racking up track championships as a teenager and beating the best NASCAR Modified drivers in the Northeast in his early 20s. While a common occurrence these days, during the early ’60s, winning a feature at age 16 (in a cutdown at the Pines Speedway in Groveland, Mass.), was head-turning. That was the beginning of a stellar racing career, first winning track championships at Seekonk and multiple features at other local short tracks, then on to Modified success across the Northeast, and finally to NASCAR’s Winston Cup, where he stunned the racing world with a victory at Talladega in August of 1981.

In the mid-’80s Bouchard turned his talents from racing cars to selling them, growing his business from a small used-car lot in Fitchburg, Mass., into a highly successful chain of dealerships in central Massachusetts. In all his dealings -- with other drivers, car owners and crew, or family and employees -- Ronnie was an even-tempered, laughter-loving, and generous man, turning his own competitiveness and drive for success into opportunities for all around him.

Award-winning author Bourcier knew Bouchard well, having covered his career for racing papers and magazines since 1976. Bourcier and Bouchard had often talked about collaborating on a book before Ronnie’s death from cancer in December 2015, which shocked the racing community. Bones has interviewed those who knew Ronnie best, from family members to household racing names, including Modified icons Bugs Stevens and George Summers, legendary car owners Bob Johnson and Bob Judkins, NASCAR Cup winners Geoff Bodine and Ricky Rudd, broadcasters Jack Arute and Mike Joy, and many more. This book is a labor of love.
After the launch and autograph session at Thompson, the book will be available from Coastal 181 for $27.95 plus S&H.  It can also be pre-ordered for free shipping before August 10, online at www.coastal181.com, or by phone at 877-907-8181. Soft cover, 264 pages, including 24 pages of photographs.

Stewart Haas To XFINITY Series In 2017

Stewart-Haas Racing will expand into the NASCAR XFINITY Series in 2017.

The organization will field a full-time, single-car team in the XFINITY Series with a driver and sponsor lineup to be announced prior to the conclusion of the 2016 season. The XFINITY Series team will be run out of SHR’s current headquarters in Kannapolis, North Carolina.
“In order to maintain the competitiveness that has earned SHR two championships since our debut in 2009, we needed an outlet to develop drivers and team personnel for the Sprint Cup Series,” said Greg Zipadelli, vice president of competition, SHR. “People make the difference between winning and losing. An XFINITY Series team gives us added depth that will allow us to promote from within whenever necessary.”
SHR won its first Sprint Cup championship in 2011 with driver Tony Stewart, and its second title in 2014 with Kevin Harvick. Since its inception in 2009, SHR has won 33 point-paying races, two non-point events and 28 poles.
“An XFINITY Series team has always been something we would consider when the time was right, and that time is now,” said Stewart, who co-owns SHR with Gene Haas, founder of Haas Automation. “Staying successful in this sport means staying ahead of the curve, and having an XFINITY Series team provides an in-house driver development program and a new channel for personnel to make a positive impact with our race team.”
“This is a natural progression of SHR’s growth and one that allows us to be more self-sufficient,” Haas said. “If you look at all the teams that are successful in Sprint Cup, they have a direct connection to the XFINITY Series where drivers, engineers, mechanics and pit crew members are developed. We’re an established team with a strong infrastructure that is ready for this endeavor.”
Posted by Dave Moody at 2:46 PM 1 comment: