Morgan McClure Motorsports General Manager Larry McClure has confirmed what Sirius Speedway first told you early last week; that State Water Heaters will not return to sponsor the team in 2008. In addition, McClure says Ward Burton will likely not return as driver. 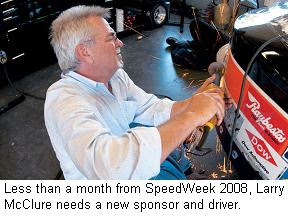 Haas CNC Racing driver Scott Riggs told Sirius Speedway Friday this his new team is in negotiations to put State Water Heaters on the side of his #66 Chevrolet this season, and McClure said this weekend that he believes the move has already happened. "Right now, we don’t have a thing,” he said. “It must have been an instant decision, because we had no idea it was going to happen. We found out before Christmas, and it became official after the holiday.’’ McClure said Burton “probably won’t be back," adding, "we’re looking at using either Mike Wallace or P.J. Jones for testing, and we will go from there."

McClure sad he is looking for a driver who can bring sponsorship to the team, and is negotiating with a major Sprint Cup Series operation to serve as a “satellite team,” sharing information in 2008. The deal is contingent on sponsorship, however.

Lucas Oil will return as an associate sponsor in 2008, but McClure said more is needed to make a full the 2008 season happen. "We’re just going to see how much money we get in the door,’’ he said. "We’re not going to race on our own money anymore."

Kahne Pleads Not Guilty: Kasey Kahne pleaded not guilty to misdemeanor battery charges stemming from an incident with a security guard at Homestead-Miami Speedway on November 16th. The written plea was filed last Thursday, and cancels an arraignment scheduled for tomorrow in Florida.

Kahne has hired Richard Sharpstein -- the attorney representing the family of murdered Washington Redskins safety Sean Taylor – to represent him in the case. The speedway security guard claims Kahne pushed him to the ground, causing injuries that have left him unable to work. Kahne's representatives say the Sprint up Series driver was simply pushing the guard's hands off him. 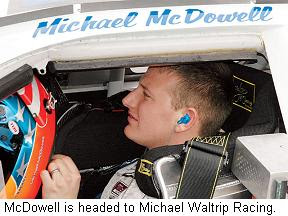 McDowell To MWR: 2007 ARCA Remax Series runner-up Michael McDowell will succeed David Reutimann in the #00 Sprint Cup car at Michael Waltrip Racing. McDowell will take over the #00 Toyota in late March at Martinsville Speedway, when Reutimann moves to the #44 UPS Toyota being vacated by Dale Jarrett .

MWR tested both McDowell and Josh Wise extensively during the offseason, with McDowell apparently getting the nod. Wise could end up in a Nationwide Series ride this season, if sponsorship can be found. A formal announcement from the team is expected in the near future.
Posted by Dave Moody at 10:00 AM