We told you yesterday that it would happen, and it has.

Bill Davis is now a minority owner of the newly renamed Penske Championship Racing, and Sam Hornish Jr. is a guaranteed starter in the Daytona 500. 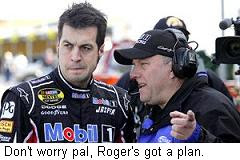 Davis sold his entire operation to Bill Held and Marty Gaunt recently, but apparently retained the 31st place owner points accumulated by his #22 Toyota and driver Dave Blaney a year ago. Those points now belong to Hornish and his #77 Dodge, guaranteeing that Hornish will be a part of the first five races of the season. A year ago, team owner Roger Penske handed Hornish the owner points accumulated by teammate Kurt Busch, guaranteed the former IndyCar star a spot in the 2008 Daytona 500 field.

Interestingly, NASCAR spokesman Kerry Tharp said today that Hornish will not take part in Saturday night’s Budweiser Shootout at Daytona, despite the fact that his newly acquired owner points would make him sixth-best among all Dodge drivers. Tharp said NASCAR has already set the Bud Shootout field, with Richard Petty Motorsports driver AJ Allmendinger taking the spot that would have gone to Hornish.

Hornish’s ascension to Guaranteed Starter status should bump 37th-place point man AJ Allmendinger onto the “Go Or Go Home” list, and with both Richard Childress Racing and Phoenix Racing seeking similar deals for Clint Bowyer and Brad Kesekowski, it appears that Marcos Ambrose may be joining him soon.

NASCAR will announce its finalized Top-35 on Friday.
Posted by Dave Moody at 12:07 PM