Jeremy Mayfield's new attorney, Bill Diehl, spoke publically for the first time Wednesday, speaking exclusively with Sirius Speedway about his client, a possible lawsuit against NASCAR and the impact of the controversy on Mayfield's career.

Dave Moody – Has there been, or will there be a lawsuit filed in this matter?

Bill Diehl – First question, no lawsuit has been filed. Will there be a lawsuit? That will depend on what happens between Jeremy and NASCAR, which ought to be known in the next couple of days.

DM – What kind of conversations are being had between Jeremy, yourself, NASCAR and their representatives to try and settle this?

BD – They’re obviously focused on whether or not Jeremy was suspended properly. Is what happened to him legitimate, should he stay suspended, should he have to go through some type of rehabilitation that they’ve asked for? Has he been mistreated and have they improperly deprived him of a way to make a living. There are (also) some side issues. They’ve said a lot of things about him that Jeremy doesn’t believe are true. There’s a separate remedy for that kind of behavior.

DM – Specifically, what has been said?

DM – Can you tell us, what specific substance has NASCAR accused Jeremy of having in his system?

DM – Do the two reports come to the same conclusion? Do they name the same substance?

BD – I’m not going to tell you what the reports say. I’ve read lots of stuff that indicates what the NASCAR reps have said and what this guy (Dr.) Black has said. The game about what is in the report is just that at this point. It’s a game. But I’m not going to participate in that game currently, beyond saying that they finally furnished two reports which they probably should have given to Mr. Mayfield long before this week.

BD – No, I won’t reveal that yet. But again, that’s something that he’s told NASCAR. They know what it was, and they’ve gotten the information from the doctor. They’re dealing with everything Jeremy could have furnished them (with) about anything that he’d taken, according to Jeremy. He did take a prescription drug, he does have a medical doctor who prescribed it, and they have that data and they had the information about the Claritin D.

DM – What would it take at this point to avoid taking this to court? 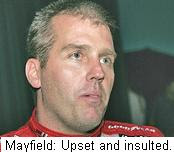 BD – Some type of acknowledgement that what happened was a mistake on the part of somebody, in connection with what they did and how they did it. We’re exploring that with them. We can’t put Humpty Dumpty back together again. They’ve said it, they’ve suspended him, and we know there are a couple of reports because we now see them. Somebody is going to have to come forward and acknowledge that, well, we thought we did what we were supposed to do, (but) maybe we made a mistake, let’s try it again.

BD – I think he’s very upset and he’s insulted. He’s had a 17-year career, had some successes. He’s just getting started with his own team, and this sort of takes you out at the knees if you’re suddenly accused of being a recreational drug user and you’re suspended from doing what you get paid to do. He wants everybody to know that he’s not guilty of what he’s accused of.

DM – Is there any unofficial timeline at this point for you to decide whether or not this takes the next step into the legal system?