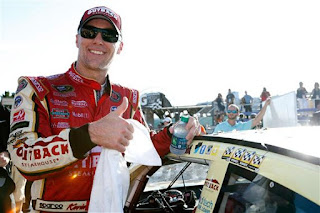 Kevin Harvick has acquired a number of nicknames over the course of his NASCAR Sprint Cup Series career. Known at various points as “Happy Harvick” and “The Closer,” the 2014 series champion has long been known as a driver capable of delivering clutch performances in times of greatest need.

For the third time since NASCAR introduced its new Chase elimination format three years ago, Harvick pulled his backside out of the fire Sunday with a victory that guarantees him a spot in the upcoming playoff Round of Eight.
Harvick came to Kansas in a decidedly precarious position; dead last in the 12-man Chase standings after a disastrous, 38th-place verdict the previous week at Charlotte Motor Speedway. With their backs to the wall and their season in jeopardy, Harvick and his Rodney Childers-led team did what they always seem to do; shrugging off the pressure with a big time performance that renders this weekend’s gut-wrencher at Talladega Superspeedway wholly irrelevant.
Harvick didn’t dominate Sunday’s race, but he never fell far from lead, either. Massaging the handling of his Outback Steakhouse Chevrolet throughout the afternoon, Harvick overcame a pair of shaky pit stops to seize the lead from Carl Edwards on a final, Lap 237 restart, the drove away to a 1.183-second decision that removed him and his team from the Talladega pressure cooker to come.
“When they're in a must-win situation, they seem to find a little more speed," lamented third-place finisher Joey Logano afterward. ""I don't know how, (but) they always seem to have a little extra left in the tank."

“He's tough to beat in these final races," added fellow Chaser Austin Dillon. "There's no doubt about it, he steps up when the pressure is there." 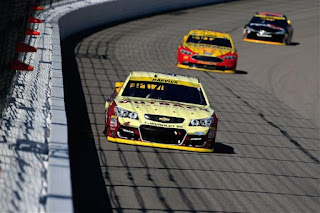 “We prepare this thing for every race,” explained Harvick, following a raucous Victory Lane celebration that included chants of “I believe that we will win” from his crew. “I try every week to find something to motivate myself, and I know these guys do the same thing. It’s hard to keep yourself motivated and continue to perform at a high level. Being able to do it for three years now says a lot about the character of this team and the things that they do.”

Prior to Sunday’s race, Childers admitted that he would prefer to advance in a safer, less dramatic fashion.

“If you keep playing with fire, eventually you get burned,” he said. “We don’t enjoy being in this position, but it is what it is. We just have to perform and persevere.”

In Kansas Sunday, they did just that, punching their ticket to NASCAR’s coveted Round of Eight.

“These guys are just so good at the details,” said Harvick, who is two-for-two lifetime in Chase elimination races, with wins at Phoenix (2014) and Dover last season. “You put their backs against the wall, and they get better. I’m really proud of them.

“I got two good restarts against (Edwards). He didn’t have a car close to him, and I was able to break the draft before I got to the middle of One and Two. I just needed to go for it, and that’s really the mind-set we go into every race in the Chase (with)… to go for it.

Locked in – along with Jimmie Johnson -- to the next round of NASCAR’s playoff grid, Harvick can enjoy a pressure-free weekend at Talladega. But questions remain regarding his team’s readiness to win a second Sprint Cup Series championship. 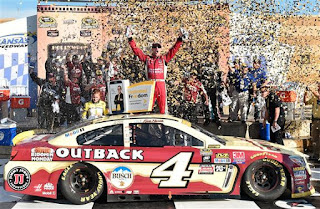 They continue to struggle on pit road, repeatedly forfeiting track position when the pressure is on. It happened again in Kansas – twice – and while the Bakersfield, California, native took the high road in Victory Lane, there is no denying that SHR’s No. 4 Chevrolet team has a major chink in its championship armor. Harvick overcame his team’s pit road shortcomings with a vintage display of balls-out driving, but as the Chase field is narrowed in coming weeks, the margin for error will diminish, as well.

Harvick, however, seems unfazed, convinced that his team’s Al Davis-esque, “Just win, baby” philosophy will continue to carry the day.

"We've won two races in the Chase, and I feel like we won both of them on restarts,” he said. “That's something we've worked on for probably a year now. When we get behind on something, we dive right in and try to make it better."
He also pointed to Childers, a low-key leader who provides the perfect balance to his more mercurial driver.
"We could say `We need to go jump off a cliff in the morning’ and everybody would be there at sunrise saying, 'All right, where do we jump?'" said Harvick Sunday. "That's the kind of group this is. Everybody has got each other's back and nobody takes offense if somebody tells them they need to do something better.
"It's a unique bunch of people, and you're only as good as the people around you. That's true in every business, and it's no different in this garage.
"I had no idea where we were in the points, or how many we were behind," he added. "The only thing we talked about was trying to figure out how to win this race. And if we didn't win this race, what we needed to do at Talladega.
"For us, it's always about reaching for something to motivate us," he continued. "If it's having to win a race, going to a racetrack we haven't won at, or rebounding from a bad week, we've been fortunate to be on the good side of this deal for three years now. We know we can perform, and we know we can perform in good and bad situations."
Just another day in the life of NASCAR’s “Captain Clutch.”