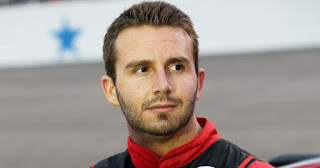 Matt DiBenedetto will drive the #32 GoFas Racing Ford in 2017.

"I am very excited to join Go Fas Racing for the 2017 season,” said DiBenedetto, who comes to GFR after running for BK Racing last season. In two years of NASCAR premier series competition, he has 68 starts and a season-best finish of sixth at Bristol Motor Speedway in 2016. “We have a great group of people that I am very excited to work with this season. I am thankful for the opportunity and I look forward to representing the team and sponsors to the best of my ability.”

"This will be our first season in the premier series with one driver running the complete season for us,” said GoFas Racing owner Archie St. Hillaire. “We believe Matt's driving ability and a fleet of newer race equipment purchased this off-season will elevate our program to new levels in 2017.

Backing for the team will come from Can-Am/Kappa, Keen Parts, Visone RV and Really Cheap Floors, with the potential for some of Scott's former RPM sponsors to transfer to GFR next season.

"We're also talking with RPM about maintaining some of the No. 44 sponsors on our car," revealed St. Hillaire in an exclusive Sirius XM NASCAR Radio interview. "Three-quarters of our sponsorships are already sold; more than we’ve ever had."

St. Hillaire confirmed that he has leased GoFas Racing's 2016 charter to Wood Brothers Racing for use on their No. 21 Ford. GoFas will race using the charter campaigned by driver Brian Scott and the No. 44 Ford last year; leased from RPM. Scott announced his retirement from the sport prior to the season final at Homestead Miami Speedway.

RPM is expected to field only a single car next season; the No. 43 Smithfield Ford driven by Aric Almirola.
Posted by Dave Moody at 4:45 PM