"It’s a great brand to be associated with," said Harvick today. "(It's) something that we’re really proud of, and says a lot about the job everybody’s done at RCR." 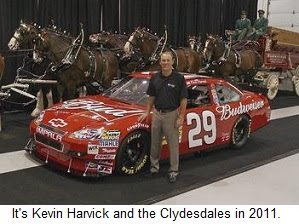 "Budweiser's involvement in NASCAR dates back more than three decades, and we're excited to have as successful a driver as Kevin Harvick to usher in a new era for Budweiser," said Mark Wright, Vice President of Media, Sports and Entertainment Marketing for Anheuser-Busch. "Kevin also benefits from the support of a highly respected owner in Richard Childress and the great people of Richard Childress Racing, who will help put the #29 Budweiser Chevy in a position to challenge for Sprint Cup championships."

The new, three-year pact will see Budweiser serve as primary sponsor on the #29 Chevrolet for 22 races, including the non-point Budweiser Shootout and Gatorade Duel at Daytona, as co-primary sponsor of the Sprint All-Star Race and associate backer for the remaining 16 events.
Posted by Dave Moody at 7:41 PM