Even In Defeat, Max Papis Is A Winner

It takes 3/10ths of a second to blink an eye. Sunday in Montreal, Max Papis’ dream slipped from his grasp in less than half that time.

After making a name for himself in Formula One, Champ Car and Sports Car competition, Papis has devoted the last five years of his life to becoming a winner in NASCAR, overcoming numerous setbacks with a boundless, unfailing enthusiasm that has made him a favorite in the Sprint Cup Series garage. Sunday, at Montreal’s legendary Circuit Gilles Villeneuve road course, Papis made his strongest bid yet for NASCAR victory in the Nationwide Series “Montreal 200.”

The race appeared to belong to Robby Gordon, but Gordon sputtered out of fuel on a green-white-checkered-flag restart, handing the lead to Boris Said. Bidding for a career-defining NASCAR win of his own, Said looked unbeatable until the race’s final turns, when Papis made a vintage, testosterone-rich move, out-braking one of the best road racers on the planet to snatch the lead away.

But Papis’ advantage would not last. A victim of its own momentum, his Kevin Harvick, Inc. Chevrolet slid up the track in the final turn, opening the door just enough for Said to counterattack. The two raced neck-and-neck down the final straightaway, as a huge and raucous Montreal crowd roared its approval. Trying to milk every ounce of horsepower out of his engine, Papis briefly hit the rev chip on his way back through the gearbox, crossing the finish line .012 seconds – about four inches – behind Said.

It was the fifth-closest finish in Nationwide Series history and the closest ever on a road course. The difference between victory and defeat was half the blink of an eye. And for Papis, it was another case of “so close, yet so far.”

“I’m really proud. I know it’s a second-place finish, but it’s equal to any of my best wins.”

After spending the last two seasons as a part-time Sprint Cup competitor in Germain Racing’s #13 GEICO Toyota, Papis will yield his seat to veteran Casey Mears beginning this week at Atlanta Motor Speedway and race full-time on the NASCAR Camping World Truck Series in 2011. Most racers would consider that move a demotion, but Papis is devoid of such ego. He says -- and genuinely seems to believe -- that the decision gives him an opportunity to race more often and more competitively in 2011.

It is a move he says he welcomes.

“I’m super excited about the opportunity to drive the GEICO Tundra in the Truck Series next year,” insists Papis. “We thought about how best to build our program, and instead of running the last four or five Cup races this season, I thought it would be better to start focusing right away on our Truck program for next year; working for the future.

“I’m excited because I have always wanted to run a full season in any NASCAR Series. That is the only way to learn and improve as a driver. Germain Racing has a lot of experience and winning equipment (in the Truck Series), and it’s an opportunity that I couldn’t turn down. This is what I came to America for; to be successful and win races in NASCAR.”

Papis said he has enjoyed his time in the Sprint Cup Series and cherishes the milestones that he and his team achieved. 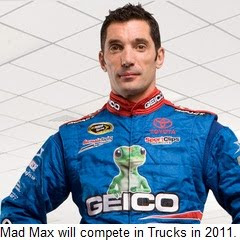 “In just 30 Sprint Cup races – 18 last year and a dozen or so this year -- I was able to race my way into the Daytona 500 on the final lap of my qualifying race, drive in the Brickyard 400 and spend some time running in the Top-10,” he said. “We did a lot, and I’m proud of how far we came. But it’s tough to race for two weeks and sit out for two. It’s difficult to improve when you’re doing a `start and park,’ instead of running the entire race. Now, I’m excited to continue my adventure in the Truck Series. We’ll be running full races -- up front with a chance to win -- and I’ll have an opportunity to learn and improve at a much faster rate.

“This is a good thing for me. This is what I want.”

In February of 1996, Papis burst onto the national scene with a stunning drive in the 24 Hours of Daytona. Driving the final stint of the annual, round-the-clock affair in a battered Ferrari held together with duct tape, Papis unlapped himself by passing leader Wayne Taylor, then strung together one “fastest lap of the race” after another, before coming up just short of Taylor in the final rundown.

Massimiliano Papis – native son of Como, Italy -- became “Mad Max” that day in Daytona Beach, Florida. And in the years that followed, the son-in-law of open wheel legend Emerson Fittipaldi has proven his willingness to do whatever it takes to be a NASCAR star. He failed to grab the brass ring Sunday, falling short by the smallest of margins. But make no mistake about it, Max Papis' day will come.

He is unwilling to accept anything less.
Posted by Dave Moody at 11:25 AM