Papis Out, Mears In GEICO Toyota At Atlanta: Mad Max To Trucks In 2011 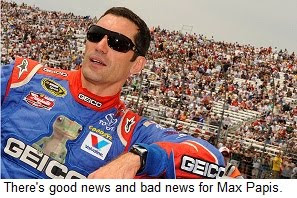 Speaking on the condition of anonymity, a source close to the team said the deal should be complete and contracts signed within the next 48 hours. The car will “start and park” at both Michigan and Bristol with drivers TBA, before Mears takes over at Atlanta. He will also drive the car in the full 2011 NASCAR Sprint Cup Series schedule.

Papis will run the full NASCAR Camping World Truck Series slate next season in a GEICO-sponsored Toyota, also out of the Germain Racing stable. Papis has also been tabbed to drive Kevin Harvick, Inc.’s #33 Nationwide Series Chevrolet at Circuit Gilles Villeneuve in Montreal later this month. “Mad Max” won the inaugural race at the Montreal course and is also a former winner on the road course at Watkins Glen.
Posted by Dave Moody at 2:24 PM