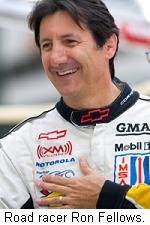 The consensus of opinion has always been that these so-called “road course ringers” are better at making right turns than the drivers they replace, and as such, will benefit the team by bringing home an up-front finish. Past history shows that nothing could be further from the truth. In fact, the average finish for this year’s “super subs” at Sonoma is a downright pedestrian 24th place. None has won a Nextel Cup race. In fact, few have even come close.

Fellows – along with Boris Said the most successful road course specialist in recent NASCAR history – has 15 career Nextel Cup starts, with two Top-5 and four Top-10 finishes. His best finish in five Infineon starts is a seventh, and his average is 23rd.

In 22 career Nextel Cup starts, Jones has just one top-five finish; a fourth at Watkins Glen in 2002. His best finish in four Infineon starts is 25th, and his average is 33rd.

In four Cup starts, Simo has an average finish of 33.2, with a best of tenth at Sonoma in 2005. Leitzinger’s best finish in three career Cup outings (all on road courses) is 12th, while Graf finished 17th in his lone Cup outing a year ago, and Goossens was 43rd in his.

That’s not exactly a track record to strike fear into the hearts of the Nextel Cup regulars. In fact, it makes one wonder whether Hall Of Fame Racing and Michael Waltrip Motorsports might be better off to stick with Tony Raines and David Reutimann, rather than importing a “road course specialist” who won’t be showing up in the top 15, anyway. 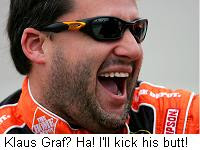 There is a perception in some corners that road racers are the most talented drivers on the planet. But if road racers are truly superior to roundy-rounders, why do the NASCAR guys seem to adapt better to right turns than the road course guys adapt to ovals? Jeff Gordon, Tony Stewart and Bobby Labonte have fared extremely well in their limited ventures into sports car racing, with Stewart nearly winning the Rolex 24 at Daytona in his maiden outing a few years ago. Find me a single right-turn artist that has come to NASCAR and thrived right away.

Juan Pablo Montoya? A respectable 23rd in points, but hardly tearing up the circuit. AJ Allmendinger? Back in 44th. Sam Hornish, Jr.? Tearing up Roger Penske’s Busch cars at an alarming rate. In fact, you have to go back to Dan Gurney to find a road racer who was able to win in NASCAR, right away.

In equal cars, I believe Gordon and Stewart would hold their own with Said and Fellows on any road course in the country. I would even like their chances against Formula One guys like Lewis Hamilton and Michael Schumacher; certainly more than I would like Schumacher and Hamilton’s odds in a NASCAR stocker.

So go ahead and get excited about the “road course ringers” this weekend if you want to. Just don’t expect much in the way of results.
Posted by Dave Moody at 1:25 PM