(Soggy) Notes From The Pocono Zone

Roger Penske told reporters this weekend that his team will not switch to Toyota next season.

"Our Dodge commitment is a long-term contract," said Penske. "I read in the paper where we’re switching to Toyota. We haven't even talked to them about it. We've got to honor the commitments that we have." 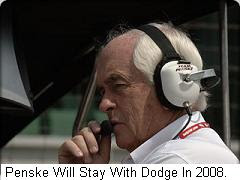 Penske said he will field at least two Nextel Cup Series Dodges next season, with the door still open on the possibility of a third team. "We've looked at whether we'd run an additional car, but we haven't made any commitment on it at this point," he said. "We've got a lot of moving parts right now. I'm not committing to a third team at this point, at all."

And finally, Penske expressed supprt for driver Kurt Busch in the aftermath of last week’s pit road incident that saw Busch fined $100,000 and docked 100 championship points. Penske said, “I looked at what happened last weekend, and the biggest disappointment I have is that I wasn't there to maybe keep that situation from happening."

He said he and Busch met with team executives last week to discuss the situation, and its impact on the team. 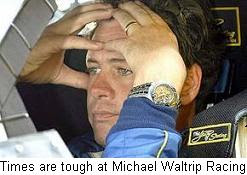 Waltrip Rumor Mill Smoking: Michael Waltrip failed to qualify at Pocono, making it 12 DNQs in 14 races this season, and adding more fuel to the fires of speculation surrounding his team.

Unconfirmed reports continue to circulate about Waltrip refunding between $300,000 and $400,000 per missed race to his sponsor, NAPA Auto Parts, and about the unhappiness of Dale Jarrett’s sponsor, UPS. Jarrett also failed to make Sunday’s race -- his third DNQ in the last five events -- and there is talk in the Nextel Cup garage that he could be released by MWR, or moved to another operation.

As a team, Waltrip, Jarrett and rookie David Reutimann have qualified just 22 times in 42 attempts this season.

Pocono Re-Signs For 2008: Pocono Raceway has fended off the Doomsday predictions for at least another year, after CEO Dr. Joe Mattioli signed a sanctioning agreement with NASCAR this weekend for two NASCAR Nextel Cup races there next season.

Mattioli said he signed the papers without reading them -- continuing a decades-long tradition -- after asking the same question of NASCAR officials that he asks each year. “I asked them, `Are you going to treat me like everybody else? Look me in the eye. I never read (the agreements). These people made us all millionaires. Never once in 35 years was I led wrong. Never.’"
Posted by Dave Moody at 12:53 PM