CONFIRMED: Texaco-Havoline Will Not Return in 2009 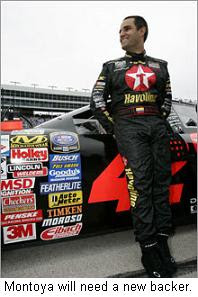 Sirius Speedway has learned that Chevron-Texaco will not return as sponsor of Juan Pablo Montoya’s #42 Dodge next season. The Texaco-Havoline brand is in the final year of its sponsorship contract with Chip Ganassi Racing with Felix Sabates, and a media representative for Ganassi Racing confirmed the move this afternoon.

Texaco-Havoline will not move to another team in 2009, electing instead to end their longstanding involvement in NASCAR. That decision leaves Ganassi Racing in need of at least two new sponsors in 2009, and possibly three. Team owner Chip Ganassi recently parked the #40 Dodge driven by Dario Franchitti due to lack of sponsorship, and there are longstanding rumors that Target may not return to the #41 Dodge currently driven by Reed Sorenson.
Posted by Dave Moody at 1:46 PM