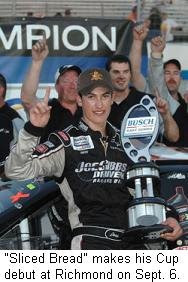 The plan is finally in place for Joey Logano to begin his NASCAR Sprint Cup Series career, with a handful of races scheduled this season in Joe Gibbs Racing Toyotas. A source close to the team said Saturday that Logano will run “six or seven” Sprint Cup races between now and the end of the 2008 campaign, in an effort to gain NASCAR approval for Logano to run for Raybestos Rookie of the Year honors next season.

Plans call for the 18-year old Connecticut native to make his Sprint Cup debut at Richmond International Raceway on September 6th, with additional races to be announced within the next 2-3 weeks. He will also run the ARCA ReMax Series race at Talladega Superspeedway for Venturini Motorsports, to satisfy NASCAR requirements for him to compete in the 2009 Daytona 500.

McDowell Replaced At MIS: Mike Skinner will drive Michael Waltrip Racing’s #00 Champion Mortgage Toyota at Michigan this weekend, replacing Michael McDowell. McDowell admitted last weekend at Watkins Glen that he is investigating his options for next season, since Michael Waltrip Racing currently has no sponsorship on the car for 2009.

Today, Michael Waltrip said Skinner will remain in the car for the upcoming races at Bristol and California. “We’ve asked Mike Skinner to evaluate areas where we can improve our on-track performance," he said. "We feel the same way about Michael McDowell as we did when we signed him, but this is the toughest, most competitive form of racing in the world, and I know Michael and MWR can benefit from Skinner’s input.”

McDowell is scheduled to return to the car at Richmond International Raceway in Setpember, and said he supports the team’s decision.

“No driver wants to get out of the car, but I understand that every part of our program needs to be evaluated, and that certainly includes me. I plan to support Mike Skinner and our team any way I can, and hopefully learn some things that will help when I get back in the car."

Skinner previously subbed for AJ Allmendinger at Team Red Bull for a number of races this season, allowing that team to right itself. Since returning to the cockpit, Allmendinger has surged in the Spring Cup standings, climbing into the Top-35 in owners' points for the first time in his career.

Mears/RCR Close To A Deal: Expect an announcement as early as this weekend that Casey Mears will join Richard Childress Racing next season as the team’s fourth driver. Details of the deal are expected to be finalized this week, with an announcement Friday or Saturday at Michigan International Speedway. 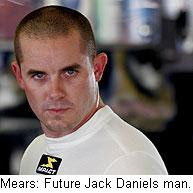 Mears will be tabbed to drive RCR’s #07 Jack Daniels Chevrolet next season, with Clint Bowyer moving to a new, #33 Chevrolet with sponsorship from Cheerios and Betty Crocker. The ride swap became necessary when General Mills – parent company of Cheerios and Betty Crocker – balked at sponsoring Mears, who is currently backed by rival Kellogg’s at Hendrick Motorsports.

RCR will petition NASCAR to transfer owner points from the #07 to the #33 at season’s end, so Bowyer will have a guaranteed starting spot in the first five races of 2009. Mears will be forced to qualify on time for the first five events of the season, and said Sunday that while he is not anxious to put himself in that situation, he would be willing to do so, “on a team that had the personnel and equipment to make the car fast enough to qualify.”

Mears insisted that there is no signed deal between himself and Childress. “I always try to be up front about this stuff,” said Mears, “but the fact is, nothing is signed and I'm still talking to other teams.” Asked if he might have an announcement by the end of the week, he said, "I certainly hope so. The sooner the better.”

And Finally: As if it’s needed, here’s more bad news for anyone hoping to snatch the Sprint Cup title from Kyle Busch’s grasp this season. With Sunday’s victory at Watkins Glen, Busch became the 18th driver in NASCAR history to record eight or more wins in the first 22 races of a season.

Thirteen of the previous 17 drivers went on to win the championship.
Posted by Dave Moody at 9:41 AM