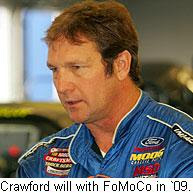 "I met with the people from Ford prior to Talladega, and they laid it all on the table," he said. "People are having a tough time in this country right now, and they're not buying vehicles the way they have in the past. The economy's in a crunch right now, and Ford has to tighten its belt a little, but we will make it through.

"Circle Bar Racing will be a Ford factory team again in 2009," said Crawford. "Our budget from Ford will be cut, but we're opening our doors to an associate sponsor to help keep us competitive. I hated to get the news (from Ford), but it's real."

After 17 years with team owner Tom Mitchell and Ford, Crawford said there is no doubt in his mind that both the #14 and #10 trucks will be Ford-powered again next season, though there will be differences in the way business is done with the manufacturer.

"Engine support will continue to be offered, but now we'll have to pay for it," he said. "This is aa temporary situation. Things will get better (economically). They always do."
Posted by Dave Moody at 6:11 PM