Kyle Petty said today that he will run the Rolex 24 at Daytona, and is considering the full 2009 Grand American Rolex Series schedule with Orbit Racing. Orbit will field a BMW Riley with Petty, Leo Hindery and Darren Manning in the Rolex 24, and Kyle said sports cars may provide the next chapter in his racing career. 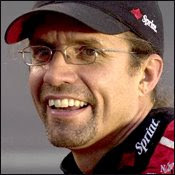 “We’re trying to put something together to run not only the 24 Hours, but all year long,” said Petty. “Obviously, I’m in a place with the Cup stuff where I don’t really have a ride right now. I have always said this is where I wanted to be. I don’t want to go back to Nationwide, and I don’t want to go run Trucks. That’s a step down from the Cup Series. This is a step over. I don’t look at this as a step down. This is a step to the top of road racing.”

Petty is no stranger to sports cars, having made six previous starts in the Rolex 24; three of them with Orbit Racing. He has three top-15 finishes overall, including a sixth-place finish in 2003 and a seventh in 2001.

His future with his family business – Petty Enterprises – is uncertain at best, with CEO David Zucker saying last week that the team will field two full-time entries next season, neither of them driven by Petty. Zucker did hold out the possibility of a part-time schedule for Petty, but only if sponsorship can be found.
Posted by Dave Moody at 5:20 PM