CONFIRMED: Benson To Red Horse In 2009 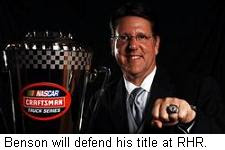 DeLoach, who owns the team along with NASCAR on FOX commentator Jeff Hammond, said sponsors are still being sought, and that Benson’s 2008 crewchief, Trip Bruce, will be atop the pit box once again next season.
Posted by Dave Moody at 12:47 PM