Brendan Gaughan is in serious negotiation to drive a NASCAR Nationwide Series Chevrolet for Rusty Wallace Inc. next season. 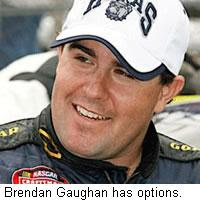 The team’s #64 Chevy was driven last season by David Stremme, who will replace Ryan Newman in Penske Racing’s #12 Sprint Cup Series Dodge for 2009. The deal has not yet been finalized, however, because Gaughan is waiting for a final decision to be made on Earnhardt-Ganassi Racing’s #41 Sprint Cup Dodge.

Sirius Speedway reported earlier this week that veteran Bobby Labonte will drive the #41 next season, and he remains the leading candidate for the ride. However, a sponsor Labonte hopes to bring to the team has not yet come through, putting the partnership – at least temporarily -- on hold.

A source close to the situation called Gaughan’s deal with RWR “99 percent done,” with an announcement expected after the holidays. That would leave the seat of the Circle Bar Racing #10 NASCAR Camping World Truck Series Ford vacant for next season. Asked about a possible return to the #10 Truck, Gaughan told Sirius Speedway Wednesday, “I won’t drive a truck for anyone but them. We have a great relationship, and I really enjoy driving for Tom Mitchell and Rick Crawford. But there are a couple of other opportunities out there, and we want to give everything a good look before making a decision.”

Gaughan was vacationing in Colorado and not available for comment today.
Posted by Dave Moody at 1:21 PM