Some Timely Larceny For Ryan Newman

Someone should have slapped a set of handcuffs on Ryan Newman at Phoenix International Raceway Saturday night. Instead of mugging for the cameras in Victory Lane, the Stewart Haas Racing driver should have been standing for mug shots at the local precinct house, after brazenly stealing the Subway Fresh Fit 600. 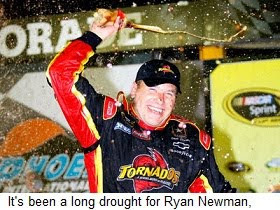 With five laps to go in the race, Kyle Busch was a stone-cold lock for his first NASCAR Sprint Cup win of the season, and his first since Bristol Motor Speedway last August. He led Jimmie Johnson by two full seconds with just three laps to go, and was literally on cruise control. Over and done, money in the bank, drive safely on your way home.

Then Scott Riggs blew a right-front tire and slapped the wall, bringing out the caution and setting the stage for a green-white-checkered flag finish.

Cue the theme from “Cops.”

Solidly in the top five but no threat to win, Newman talked crewchief Tony Gibson into taking just two tires as the leaders headed for pit road, gambling that he would gain sufficient track position to make himself a contender. Busch took four tires, dropping from first to eighth for the ensuing restart. Jeff Gordon won the race off pit road with Newman second, and when the DuPont Chevrolet driver uncharacteristically spun his tires at the drop of the green, Newman was long gone, the beneficiary of the greatest act of vehicular larceny since the Brinks Job.

"I couldn't believe it," said Newman after celebrating in Victory Lane for the first time since the 2008 Daytona 500; a span of 77 races. "It's been a long time coming.”

The win could not have come at a better time for Newman or Stewart-Haas Racing. After exceeding even their own expectations a year ago by putting two cars into the Chase for the Sprint Cup, it’s been a hot-and-cold start for SHR this season. While Stewart came to Phoenix a solid eighth in points, Newman languished back in 22nd place.

The #39 team needed a lift, and they got it at Phoenix, becoming the first squad in NASCAR history to win a Sprint Cup race with that particular number on the door of their race car.

"It was tough," said Newman of a winless 2009 campaign and his 77-race absence from the winner’s circle. "I'm not going to kid you about it. Tony won (six) races. We were close, but we gave some away when we had a chance to win. Tony told me he loved me (in Victory Lane). I told him I loved him, too. This was the most emotional victory of my career because it's been so long."

Saturday night’s race also provided a nice change of pace for those inhabitants of NASCAR Nation who have grown weary of the ongoing Jimmie Johnson Benefit. The four-time and defending Sprint Cup champion had a dominant car for most of the night at Phoenix, leading more than 100 laps and positioning himself solidly for the win come crunch time. But this time, he and Knaus played their cards imperfectly at the end, and were left to scramble their way to a hard-fought third place finish behind Newman and Gordon.

The Lowe’s Chevrolet has now failed to visit Victory Lane in TWO CONSECUTIVE RACES as the series heads to Texas Motor Speedway, though Team 48 does lead the Sprint Cup points by 36 over Matt Kenseth’s Crown Royal Ford bunch. 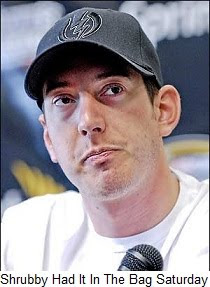 And finally, there was Kyle Busch, who stomped away in a huff after race. Who can blame him, really? While crewchief Dave Rogers wasn’t alone in opting for the security of new rubber all around – boy genius Chad Knaus made the same call for Johnson – Busch was literally seconds away from sweeping the Phoenix weekend.

In time, he may appreciate the irony of losing Saturday’s Sprint Cup race due to a late caution flag, just 24 hours after winning the Nationwide event under almost identical circumstances. But right now, that wound’s a little too raw.

"Kyle stole one last night, so now he's even," said Newman afterward. "That's racing. You never know what will happen. That's why people love this stuff. There's a lot of drama."
Posted by Dave Moody at 12:51 PM