A number of listeners and readers have asked about the apparent disparity in the so-called "shark fins" used by Sprint Cup teams last weekend at Martinsville Speedway. 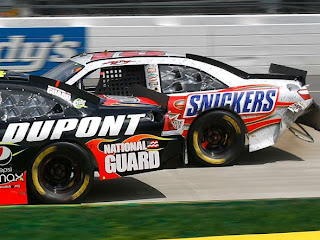 As illustrated in the above photo, some teams (like Kyle Busch's) elected to use the full-length fin, running from the top of the rear window to the rear spoiler. Others (like Jeff Gordon's Dupont Chevrolet team) ran smaller fins, or no fin at all on the trunk lid.

NASCAR spokesman Ramsey Poston provided a clarification of the new rule today, saying that the rear deck fin will not become mandatory until the series races at Texas Motor Speedway on April 18. Fins will be mandated to be 3.5 inches tall, and must be at least 17 inches in length. Teams may run any length fin from the 17-inch minimum to the full 25-inch version, tailoring the length to help fine tune the handling characteristics of their cars.

Full (25 inch) fins will be mandatory at both Talladega and Daytona.
Posted by Dave Moody at 8:19 PM