It’s Monday morning in Martinsville, Virginia. The 7:15 AM coal train just rolled through, rousing a few thousand fiercely determined, never-say-die race fans from a fitful, thunderstorm plagued sleep. Most of their buddies packed their bags and headed for home 12 hours ago, not long after NASCAR ran up the white flag of defeat and postponed the Goody’s Fast Pain Relief 500 from Sunday afternoon to high noon Monday, due to rain.

It’s a familiar story to longtime Martinsville fans. Late March in the Commonwealth of Virginia is always a crap shoot weather-wise. One day it’s sunny and 75 degrees; Chamber of Commerce weather. The next day is rainy, cold and bleak with temperatures in the low 50’s. See you Monday, everyone.

With every Martinsville rainout, the chorus in some corners of NASCAR nation begins anew. “They don’t deserve two races,” they say. “Take that spring race and move it somewhere warm. Realign the schedule and give their date to a fancy new track like Kansas.”

Martinsville Speedway deserves two spots on the NASCAR Sprint Cup Series schedule, and there are plenty of reasons why.

Martinsville doesn’t have a catchy advertising slogan, because it doesn’t need one. Fans know that when they plunk down part of their hard-earned paycheck at Clay Campbell’s ticket window, they’re going to get one heck of a race in return. And maybe a couple of those one-of-a-kind hotdogs.

There’s no Hollywood back lot pre-race extravaganza at Martinsville. Nobody stages a mock invasion of Afghanistan, nothing explodes, and nobody jumps a school bus over a troop of Cub Scouts for your viewing pleasure. They just introduce the drivers, do a little singin’ and prayin’, then get on with the race.

Whitney Houston doesn’t sing the national anthem at Martinsville. That spot is reserved for the local High School band, which annually delivers one of the best and most respectful renditions of the season.

I understand that it’s important to grow the sport. I understand that fans with Rolex watches and personal assistants spend more money on race day than the guy who spent the night sleeping in a tent in the mud. I get that the fancy new speedway with the casino in Turn Two is going to impact the parent company’s bottom line more positively than an antiquated half mile with railroad tracks just off the backstretch. But I also understand that image is not as important as substance, and that a glittering facility and a fancy press box do not make up for a crappy race.

You don’t have to wait for the post-race media availability to find out how your favorite driver’s day went at Martinsville. Just watch for the inevitable post-race shoving match.

You don’t hang out after the race to catch the free Peter Frampton concert at Martinsville. You head for the car and watch some guy in a homemade off-road pickup truck pull people out of ankle-deep mud for $50 a pop. 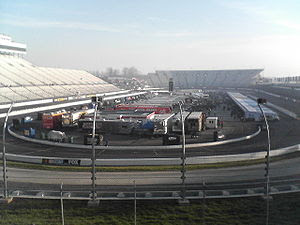 Give me a racetrack where the best restaurant in town isn’t a soulless chain with 57 big-screen TVs on the wall, but a joint with vinyl booth seating that just happens to sponsor the five-time National Late Model champion. Give me a track where half the field finishes with its front fenders no longer attached, and where marketing still plays second fiddle to racing. Give me a track where the man in charge is the grandson of the man who built the place with his own hands.

Our sport is sadly overstocked with perfectly polished, stainless steel, 1.5-mile tri-ovals that have more corporate suites than cheap seats. We’re up to here with cookie-cutter, single-file, aero-push speedways that have all the charisma of a Ben Stein economic dissertation. We have too many International Motor Speedways, and too few racetracks.

Martinsville is a racetrack; a motorized Fenway Park in a Safeco Field world. And it must be preserved.

Lesa France Kennedy -- if you’re listening -– please leave Martinsville’s race dates alone. We don’t mind the rain, the mud, or the 7:15 AM coal train alarm clock. We cherish the tradition that permeates every inch of those rolling Virginia hills, and think it’s important to be reminded where we came from, if only twice a year.
Posted by Dave Moody at 9:51 AM