U.S. District Court Judge Graham Mullen has dismissed all claims in Jeremy Mayfield’s lawsuit against NASCAR in the aftermath of a May drug test that NASCAR says was positive for methamphetamines. NASCAR had filed a motion for dismissal in November, and Mullen ruled today that Mayfield “agreed to release Defendants from all claims arising under a negligence theory or otherwise; Plaintiffs thereby waived their right to pursue their claims for defamation, unfair and deceptive trade practices, breach of contract, and negligence.”

A trial had been scheduled to begin in September of this year, but the court agreed with NASCAR that while its testing laboratory needed to be government-accredited, the sanctioning body was under no obligation to follow all governmental procedures concerning the administration of the test and the handling of samples. 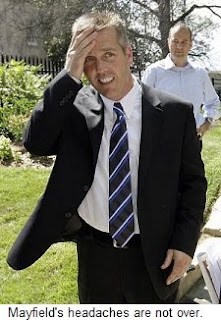 Mayfield has claimed that his positive test result was due to a combination of the prescription drug Adderall -– which he took to treat Attention Deficit Hyperactivity Disorder -– and the over-the-counter allergy medication Claritin-D. At various points, Mayfield and/or his attorneys have accused NASCAR’s testing agent, Aegis Sciences Corp., of improperly handling test samples and alleged that NASCAR intentionally “spiked” Mayfield’s urine sample to produce a positive result. Mullen ruled that Mayfield and his legal team “failed to allege facts to support each of their claims.”

The basis of Mullen's ruling are documents signed by Mayfield while applying for a 2009 competitor’s license that outlined NASCAR’s substance abuse policy, acknowledged the sanctioning body’s right to test him and/or members of his team for substance abuse at any time and accepted that those tests were to be done “at a facility or facilities… that have been certified by the Substance Abuse and Mental Health Services Administration of the United States Department of Health and Human Services and/or by the College of American Pathologists Forensic Urine Drug Testing Program.” Mullen ruled that Mayfield was aware and informed that a positive test for a prohibited substance would result in the indefinite suspension of his NASCAR license.

The court also pointed to a provision in the signed release stating that “the Competitor or Official shall have no claim or cause of action of any kind against NASCAR or any director, officer, employee, or agent of NASCAR” with respect to the publication of substance abuse test results.

Mullen specifically noted a clause in the document signed by Mayfield that states, “I recognize that the NASCAR Substance Abuse Policy promotes the integrity of NASCAR-sanctioned racing and the safety of NASCAR Competitors, Officials, and spectators. Accordingly, I HEREBY RELEASE, DISCHARGE, COVENANT NOT TO SUE, AND AGREE TO HOLD HARMLESS NASCAR, its officers, employees, directors, agents, and such testing facilities and Medical Review Officers as NASCAR retains or selects in connection with implementation of the Policy…”

NASCAR spokesman Ramsey Poston commented on the ruling today, saying, "The U.S. District Court's ruling is a powerful acknowledgement and affirmation of NASCAR's rulebook and its ability to police the sport. NASCAR has been very clear with its competitors as to its policies and what is expected of them. NASCAR's comprehensive substance abuse policy, which is among the best and toughest in all of sports, serves the safety of our competitors and fans."

Mayfield has not commented on the decision, though his wife, Shana, said attorney Mark Geragos would respond on their behalf. Today’s ruling can be appealed to the U.S. Court of Appeals. 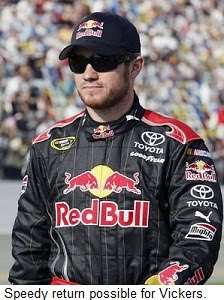 Vickers Not Out Yet: Sirius Speedway has learned that Brian Vickers could return to the seat of the #83 Red Bull Racing Toyota in time for this weekend’s NASCAR Sprint All-Star Race at Charlotte Motor Speedway. Sources speaking on the condition of anonymity say Vickers has responded well to treatment for Deep Vein Thrombosis, and will undergo testing later this week to determine whether blood thinning drugs have dissolved the blood clots in his legs and lung. If so, and if his doctors are satisfied with the level of blood-thinners in his system, Vickers could be cleared to compete on Saturday night. Casey Mears remains on standby in the event that Vickers is not cleared to compete, and a decision on his status could come as late as race day.

Kahne Still Not Placed: Stewart Haas Racing Competition Director Bobby Hutchens told The Charlotte Observer Sunday that he has had no formal conversation with Hendrick Motorsports about adding a third team for driver Kasey Kahne next season. Hutchens said, "We have not had what I call permanent discussions with Mr. Hendrick or anybody at Hendrick Motorsports. Kasey Kahne was a possibility back when we started looking at (a third team) for ourselves in the middle of last year, so we're going to just see how all this shakes out." Hutchens added that in the current sponsor marketplace In addition, he said he would prefer to have a driver and sponsor locked-in by June 1 if a third team is going to be attempted, in an effort to "not be in a panic" building cars and adding new equipment and personnel for the 2011 season. Kahne will replace Mark Martin in the #5 Hendrick Motorsports Chevrolet in 2011, and team owner Rick Hendrick has promised to find him a top-notch Sprint Cup ride for 2010 to fill the void.
Posted by Dave Moody at 8:51 PM