Vickers Out For Remainder of 2010 Season

Brian Vickers met with the media at Charlotte Motor Speedway last hour and confirmed that the blood clots he suffered in his legs and lung last week will preclude him from competing for the remainder of the 2010 season. 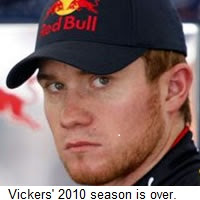 In a press conference heard live here on Sirius NASCAR Radio, Vickers said his doctors have been unable to pinpoint the specific cause of his Deep Vein Thrombosis, which is most common in people over the age of 40. The 26-year old driver said he will continue on a daily regimen of blood thinning medication for at least the next three months, and joked, "I can race on blood thinners, I just can't crash."

Vicker’s physician, Dr. Steven Limentani, called his condition “not a rarity, but not common,” saying clots like Vickers suffered usually have a clear cause, such as a surgical procedure.”

Casey Mears replaced Vickers last week at Dover, and will remain in the car for the remainder of the season, with possible exception of the two road course events at Watkins Glen and Infineon Raceway.
Posted by Dave Moody at 2:29 PM