Random Thoughts From A Wild Weekend At Talladega

Chess Players And Daredevils: Brad Keselowski continues to be one of the most eloquent, thought-provoking interviews in the sport, as evidenced by his post-race comments at Talladega. "Racing has always been a balance of daredevils and chess players," said Keselowski Sunday, just moments after winning the GEICO 500. "Some weekends we're chess players, some weekends we're daredevils. This has always been the more daredevil style of track.” He also served fair warning that his Miller Lite Ford team is feeling its oats after clinching their second victory of the 2016 campaign. “If you’re capable of winning here, I think you show a certain level of attitude and swagger that carries your way through the rest of the year.”


On-Track Intensity: While there's nothing worse than rain at the race track, there may be nothing better than impending rain. With thunderstorms skirting the speedway throughout Sunday’s race, drivers were “up on the wheel” all day, making for intense competition and creating multiple Talladega “Big Ones.”
"It's just Talladega,” said runner-up Kyle Busch, one of the few drivers able to bring his car home without major damage. “It is what it is. (With) these cars, you try to get a little bit aggressive, start bumping people and pushing people, they're real easy to get out of control.”
Plenty of people got “out of control” Sunday, including veteran Matt Kenseth and rookie Chris Buescher, both of whom got upside-down on the Talladega backstretch in separate multi-car incidents.
"I really have no clue (what happened)," said Buescher afterward. "It's not the way we wanted to finish. We just got clipped. I'm tired of superspeedway racing, I can tell you that. It’s miserable. It's a bummer. No fun. I’m ready to go home."


Comments like Buescher’s are not uncommon following restrictor plate races at Talladega and Daytona. They are also completely understandable. After all, no one climbs out of an upside-down race car with a smile on their face.


Bad Blood Continues: Among the many postrace storylines Sunday was the rekindling of a long-simmering feud between Kenseth and Joey Logano. The pair famously clashed at Kansas and Martinsville Speedways during last year’s Chase, with Kenseth ultimately earning a two-race suspension for on-track retribution. They butted heads again Sunday, after Logano appeared to force Kenseth below the yellow line in a late-race backstretch incident. The move plummeted Kenseth to the back of the pack, where he was eventually swept-up in a clash with Danica Patrick that saw his Dollar General Toyota flip upside-down into the inside wall.
“I don’t THINK he ran me off,” said Kenseth afterward. “He DID run me off. He ran me so far down that I couldn’t really lift. I couldn’t get back up the track. I thought we were done with (our issues), but maybe we aren’t.”


The rivals had a brief discussion following the race, with Kenseth doing a majority of the talking. Asked about Kenseth’s criticism, Logano quipped, “He can get in line with the rest of them.”
While much will be made about their continuing bad blood, it provides a welcome departure from the “we’re all friends” atmosphere that dominates the sport these days. NASCAR was built on guys like Richard Petty and Bobby Allison going head to head – and bumper to bumper – for the win, carrying personal grudges and animosity from track to track like so many spare tires. Today, on-track disputes are generally settled via Twitter, or over a glass of pinot noir in the oh-so-cozy driver/owner motor coach lot; a far cry from the times when Victory Lane ceremonies were regularly punctuated by a stiff right-cross to the chin.
Disturbing Trend: Dale Earnhardt, Jr. became the second Hendrick Motorsports driver in recent weeks to have his steering wheel come off in his hands. Shortly after returning to the track following repairs from an earlier crash, the steering wheel pulled loose while Earnhardt circled the track under caution. “I was trying to get it back on and the car was headed toward the wall,” he said. “I wasn't going to let it hit the wall, so I grabbed the column and steered with that. It tore my hands all up, but didn't hit the wall.” Hendrick Motorsports teammate Jimmie Johnson had an identical situation in a qualifying crash earlier this season.
Encouraging Trend: NASCAR Chairman and CEO Brian France attended a meeting of the NASCAR Drivers Council Friday, for the first time in the history of the organization. France has said before that he believes the meetings go better – and are more candid – without him in the room; a stance that earned him criticism from Tony Stewart in January. France spent more than an hour in Friday’s meeting before leaving to honor a prior commitment, earning praise from all attendees. "It was great that Brian came," said Dale Earnhardt Jr. afterward. "It was just a good, positive meeting, a lot of good things moving in a good direction.


For his part, France said simply, “We had a good discussion.” 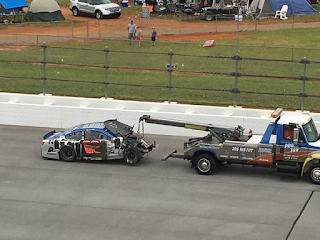 Rest In Peace: Earnhardt’s flirtation with the superspeedway car dubbed “Amelia” -- in honor of aviatrix Amelia Earhardt – is almost certainly over. Rebuilt after a grinding crash at Daytona International Speedway in February, Amelia was involved in two more crashes Sunday; one of them a solo spin with just 50 laps complete, that left her a twisted heap once again. She will likely be relegated to the “race car cemetery” Earnhardt has assembled on property surrounding his North Carolina home to rest (and rust) in peace.


Non-Issues: Any controversy that lingers in the aftermath of Saturday’s NASCAR Xfinity Series finish is attributable to people who are either intellectually incapable of understanding the rules, or psychologically unwilling to do so.


Elliott Sadler won Saturday’s Sparks Energy 300 after a wild, final-straightaway melee triggered when he and Joey Logano tangled while racing for the win. The victory was his first of the season and locked him into the NXS Chase. Logano led off the final turn, but moved high to block youngster Brennan Poole, opening the inside lane for Sadler. When Logano darted back to the bottom, he and Sadler made contact, forcing the eventual winner below the double-yellow line and sending Logano hard into the outside wall. Poole crossed the finish line first, but was eventually credited with a third-place finish after a five-minute video review that re-wound the running order to the moment the caution flag waved. Justin Allgaier was credited with second, followed by Poole, Jeremy Clements and Brendan Gaughan.


Sadler's win took nearly five minutes to be confirmed by NASCAR officials, who used video tape to determine that he was ahead of Poole and Allgaier when the decisive caution flag flew.


‘We use every resource we can,” said series director Wayne Auton afterward. “It took us a little time, (but) we feel 100% that we got it exactly right. We used every bit of film we had. We arrived at the finish we did by using every piece of technology that we had to our availability."


Auton confirmed that Sadler’s excursion below the double yellow line was legal, since, “The rule says you cannot go below the double yellow line to advance your position. (Sadler) did not advance a position, and he was also forced down there when (Logano) and him made contact. In our eyes, he did not gain any positions. He was already (in the lead). It was legal by the rules."


Auton also explained the final-lap caution flag, saying, "Our No. 1 job is the safety of these drivers, crew members and fans. When you see a car turn hard right… it's pretty scary. Our No. 1 concern when (Logano) hit to make sure Joey was OK. Automatically, we put out the caution. Another car made contact with him when he come off the wall, and we needed guys to roll out of the throttle.”