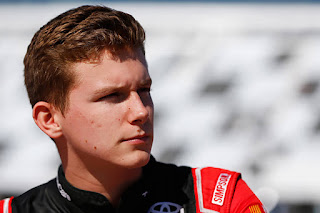 GodfatherMotorsports.com has learned that Matt Tifft’s scheduled double-duty weekend at Iowa Speedway has been derailed by injury.


Multiple sources say Tifft is battling a disc problem in his back, and will not compete in either of this weekend's events. He will be replaced in Sunday’s Xfinity race by veteran Sam Hornish, Jr., making in his first NASCAR start of the 2016 campaign. No replacement has been confirmed for Saturday night's Truck race.


Tifft, a native of Hinckley, Ohio, has run six of 13 races this season on the Xfinity Series, with back-to-back eighth-place finishes in his last two starts at Talladega and Dover. He has also made three Truck Series starts in 2016, with a best showing of fifth at Charlotte Motor Speedway.
Posted by Dave Moody at 2:58 PM