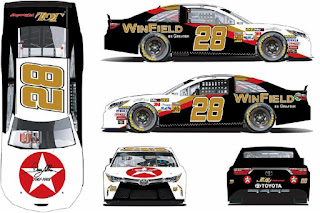 JGL Racing is the latest team to join the “Throwback Party” during Bojangles Southern 500 Weekend at Darlington Raceway, unveiling a special tribute to legendary driver Davey Allison and his historic rookie season of 1987.

Dakoda Armstrong will pilot the No. 28 "Davey Allison Tribute" Toyota in next Saturday’s VFW Sport Clips Help A Hero 200 on Saturday. In addition to Allison’s familiar colors, a special Davey Allison Tribute logo will adorn the hood of the No. 28 Toyota, with season-long sponsor Winfield displayed on the upper rear quarter panels.

"It is with great pleasure that we pay tribute to one of the legends of our sport," said James Whitener, owner of JGL Racing. "We had so much success with our throwback scheme last year and we are looking for this years to be even better.  I am a fan of this sport as well as a team owner and being able to run the 1987 Rookie of the Year paint scheme of Davey Allison is super special for all of us at JGL Racing.  We look forward to representing Davey and his legacy in a first class and professional manner."

The 1987 season was a special one for Allison and his Harry Ranier-led team. After losing the Hardee’s sponsorship from the previous season, Ranier negotiated a deal with Texaco's Havoline motor oil brand, signing the deal during Speedweeks at Daytona International Speedway. On qualifying day, Allison signaled that he was in Winston Cup to stay, qualifying the Texaco-Havoline Thunderbird second for the 1987 Daytona 500; the first rookie ever to start on the front row for NASCAR's most prestigious event.

The pole was the first of five he garnered during his rookie campaign, along with two wins, nine Top-5 and 10 Top-10 finishes.

"Robbie, Krista and I are honored that Davey's 1987 Rookie Paint Scheme will be a part of such a special weekend of throwbacks at Darlington,” said Liz Allison, Davey’s widow. "Having the No. 28 on the track in the XFINITY Series with JGL Racing and Dakoda behind the wheel means so much to our family. This paint scheme is what fans remember most of all of Davey's cars. We are truly grateful to have Davey remembered in this way."
Posted by Dave Moody at 12:49 PM