Best Buy is expected to share sponsorship of the car with Valvoline and Stanley Tools. 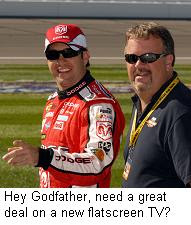 Gillett Evernham Motorsports co-owner (and Sirius Speedway regular) Ray Evernham called the deal, "a natural fit," and Sadler said, "I’ve always been a ‘gadget guy.’ My house, car, boat and even my motor home are all tricked out with stereos, speakers, gaming systems, GPS, flat screens, DVD players, you name it. The employees at the Mooresville Best Buy store already know me by name, but they’ll be seeing even more of me now.”