Here's What To Expect At NHIS

Since the announcement last week that New Hampshire International Speedway had been sold to Bruton Smith and Speedway Motorsports, Inc., many observers have begun scrambling to come up with scenarios that will allow the Loudon oval to keep both of its NASCAR Nextel Cup Series races. 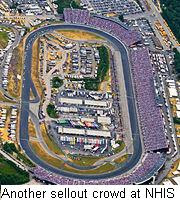 NASCAR Chairman/CEO Brian France has already extended the track a brief, one-year reprieve, saying there will be no changes to the 2008 Nextel Cup schedule, since sanctioning fees have already been paid and the schedule made public. But NASCAR's stay of execution will be a brief one, and in 2009, the newly renamed New Hampshire Motor Speedway will host just one Nextel Cup race.

Yesterday’s Dickies 500 at Texas Motor Speedway coincided with the opening weekend of deer-hunting season in the Lone Star State; a day when an estimated one million Texans cancel the rest of their lives and head for the woods. That scheduling conflict adversely impacts ticket sales at TMS, and track president Eddie Gossage is understandably interested in negotiating an earlier slot for his speedway in the Chase For The Nextel Cup. The recent sale of NHIS offers a perfect opportunity for him to do exactly that.

In 2009, expect SMI to request permission to move the opening round of the Chase from New Hampshire to Texas, and shuffle Texas’ early November event to Las Vegas Motor Speedway, where the only whitetails to be found are dancing for tips (and tips only) on the Strip.

NASCAR benefits from the move by opening its 2009 playoffs in a high-visibility, major market city, rather than the sleepy little hamlet of Loudon, NH.

Las Vegas Motor Speedway benefits from the addition of a long-coveted second Nextel Cup date; and a Chase date, at that. 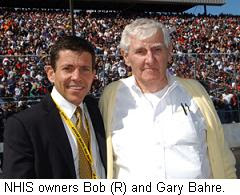 The only losers will be New England race fans, who will have their diet of NASCAR Nextel Cup Series racing reduced to a single, meager helping in early July. That’s harsh treatment for a group that has sold out every Nextel Cup race ever held at the track, and a potential death blow for the NASCAR Busch East and Whelen Modified Tours; both of which have built their schedules around a pair of lucrative annual appearances at NHIS. Bob Bahre always considered it his duty to support local racers by including them in his Nextel Cup mega-weekends. Bruton Smith may or may not be so inclined.

As a native New Englander, I'll be more than happy to eventually be proven wrong on this one. But somehow, I don't see it happening. Race fans, enjoy your final season of twice-annual Cup racing at NHIS.
Posted by Dave Moody at 11:27 AM