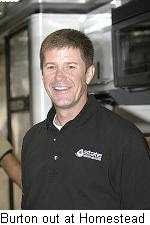 Morgan-McClure Motorsports President Tim Morgan made that announcement today, saying that both Burton and the team have agreed to the change, in an effort to evaluate the performance of the team. "Ward has worked hard for us this year, he is a good driver and a friend," said Morgan. "Todd has been helpful to us in the past and has agreed to step in and help us benchmark our efforts as we get ready for the 2008 season."

Morgan said State Water Heaters will return to the team next season, and that he is searching for additional sponsorship. No decision has been made on a full-time driver for the 2008 NASCAR season.

Records Possible For Johnson, Biffle: Only two drivers have ever won more than four consecutive NASCAR Nextel Cup Series races. Jimmie Johnson has a chance to be the third.

Richard Petty actually accomplished the feat twice, winning five straight in 1971 at Malta and Islip (NY), Trenton (NJ), Nashville and Atlanta; and an incredible 10 in a row as part of a 1967 season that saw him win 27 of 48 races overall. In 1971, Bobby Allison claimed five-straight checkered flags at Charlotte, Dover, Michigan, Riverside and Texas World Speedways.

Greg Biffle has a chance to extend a hot streak of his own this weekend by winning his fourth consecutive Nextel Cup race at Homestead-Miami Speedway. Biffle has won the season-ending Ford 400 in each of the last three seasons, and said he is confident that a fourth checkered flag could be just around the corner. "The car has been really fast everywhere we've taken it, and I'm positive that we can at least challenge for (the win)," he said. He will drive the same car Sunday that won at Kansas Speedway earlier this season. Biffle said a fourth Homestead win would equal his personal high of four consecutive Late Model wins set early in his career at Tri-Cities Speedway. 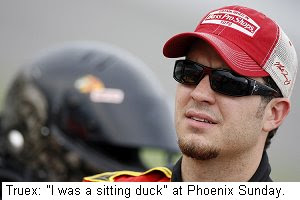 After Sunday’s race, Martin Truex, Jr., was extremely critical of the call made by crewchief Kevin “Bono” Manion to remain on the track during the race’s final caution. Truex inherited the lead when all the other frontrunners elected to pit for tires and fuel, but faded back to seventh in the final laps.

Truex said he was “a sitting duck” in the final laps, and called the decision to remain on the track “unfortunate,” prompting an angry reaction from Manion. “It is my decision,” he said. “I wanted to stay out, (because) I thought that was our best chance. We make calls on the pit box to win races. We don’t make calls to run seventh. We don’t make pit decisions to run us out of gas. No matter what…we decide on the pit box, we get ridiculed and criticized by the driver. It is tough to swallow.”
Posted by Dave Moody at 1:12 PM