NASCAR President Mike Helton was half-right this weekend, when he said NASCAR’s approach to substance abuse issues is working. NASCAR currently tests its athletes for banned substances only when it feels a need to do so, trusting the judgement of its officials and competitors to detect potential problems in the garage area. Erratic conduct –- on or off the racetrack -– can earn a driver or crewmember a mandatory invitation to be tested, and in Helton’s opinion, the system works.

“The community polices the community,” said Helton in an interview with The Associated Press. “We're different than other sports, where we have multiple layers of independence. We know of car owners that have random testing programs with their employees. Those elements are already there. There's a lot of ways to attack this animal, and a lot of ways to do it, but the shared responsibility between the competitors, the car owners and NASCAR, I think, works.”

Helton hailed NASCAR’s response to proven cases of substance abuse, calling it one of the most stringent in all of sports. "When we do…authenticate the abuse of a substance, it is a severe reaction,” he said. “It's not just a couple of weeks off, it's a very severe, career-changing reaction from us that I think speaks loudly."

On that point, Helton is absolutely correct. NASCAR deals with substance abusers more quickly, severely and publically than any other sport, and it should be applauded for doing so. Unfortunately, its methods for detecting substance abuse are not nearly so laudable.

The sanctioning body’s “If You Do It, We Will Know It” approach to substance abuse dates back to the mid-1980s, when driver Tim Richmond raised red flags from one end of the NASCAR garage to the other. Richmond’s playboy lifestyle, erratic behavior and frequent health problems prompted a number of his fellow drivers to complain to NASCAR about possible drug use, and after a life-threatening case of pneumonia caused him to miss much of the 1987 season, rumors of his alleged drug use ran wild. When he attempted to compete in the 1988 Daytona 500, NASCAR tested him for drugs, discovering high doses of over-the-counter medication in his system. NASCAR refused to let Richmond compete, even after he passed a second test.

Richmond died of AIDS on August 7, 1989, and since then, NASCAR’s substance abuse policy is virtually unchanged. As a result, the vast majority of competitors in NASCAR’s top series’ have never – ever -- been tested for banned substances. That’s an incredible statement in this day and age, and it is a fact that does not sit well with many drivers.

"In the 10 years that I've raced, I've never been drug-tested," said Kevin Harvick last week. "To me, that's not a proper drug policy for a professional sport. We haven't made any headway whatsoever on the drug-testing policy."

Tony Stewart agreed, saying, “I think it should be mandatory to have random drug testing. The (Aaron) Fike situation shows that as an organization, we're not doing a good job of seeing this before it happens." 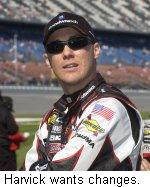 Clearly, Fike’s admission that he used heroin daily in the eight weeks prior to his arrest – even on days when he competed on the NASCAR Craftsman Truck Series – raises a warning flag about NASCAR’s ability to detect drug abuse in its ranks. Had Fike not been arrested in the parking lot of an amusement park with heroin and drug paraphernalia in his possession, he would have continued to compete, endangering himself and others for at least a while longer.

NASCAR never knew Fike had a problem. Neither did his Red Horse Racing team, which saw nothing to indicate the presence of a drug problem. Fike’s own family – the people who presumably know him best – had no idea that he had descended into the black hole of heroin addiction. If they didn't see it, NASCAR cannot reasonably be expected to have done so.

Yes, the system is antiquated, with loopholes big enough for a heroin addict to pass through undetected. But many of us share the blame, as well. At least two drivers -- Harvick and Kasey Kahne – say they have suspected a fellow driver of drug use in the past, but said nothing about it to NASCAR. Media members and fans have remained smug and secure for far too long, clinging to the misguided belief that drugs cannot invade our sport the way they have infiltrated every other facet of society.

Aaron Fike’s recent admission proves that NASCAR’s current system of detection does not work. His revelations should shake all of us – Mike Helton included – out of the doldrums once and for all. If someone with a daily crank habit can escape detection while racing at the front of the NASCAR pack, someone with a recreational marijuana or cocaine problem will have no trouble doing the same.

NASCAR’s method for dealing with substance abusers is top-shelf. But its ability to find them needs an immediate and thorough overhaul.

“If I have to pee in a cup 15 times a year, I'm happy to do it,” said Harvick. “I want everybody in the world to know our sport is clean. I want fans and sponsors to know this garage is clean."
Posted by Dave Moody at 1:10 PM