NASCAR inspector Brienne Davis was killed last night in an automobile accident during rush hour on I-77 North near Huntersville, NC.

Her truck reportedly sideswiped another vehicle near Exit 23, and she was thrown from the vehicle when it overturned. She was airlifted from the accident scene to Carolinas Medical Center, where she was pronounced dead. The driver of the other vehicle was not seriously injured. 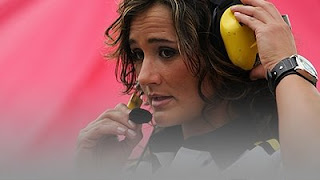 Brienne got her start in the sport at age 22, working in the engine shop at Dale Earnhardt, Inc. Her initial goal was to become the first female over-the-wall crewmember in NASCAR Cup racing; a goal she had both the determination and physical ability to achieve. She eventually joined NASCAR as an official in 2004, working primarily in the post-race tech line, tearing down the engines of the top three cars.

She also worked as a corner flagger/spotter, and she and I spent plenty of time hanging off the back of billboards together over the last few seasons. She was a free spirit, always good for a laugh and totally at ease in any environment.

I last spoke with her a week ago Sunday, in the parking lot of our hotel in Martinsville. It was 6 a.m., barely 40 degrees, and Bree was firing up her Harley for the ride to the track, wearing just about every item of clothing she owned. She told me that three or four different teams had offered to haul the bike back to Charlotte for her, but that she was determined to ride it home because she didn’t want people to think she was a wimp.

As she spoke, it began to rain. I laughed, “Great idea, Davis, enjoy the frostbite!” She laughed, flipped me the bird and rode away. She was quite a girl, and she will be missed by so many of us in the NASCAR garage. Brienne Davis was just 28 years old.