Suspended NASCAR driver Aaron Fike has admitted that as part of his long-term addiction to drugs, that he sometimes injected heroin on race days. 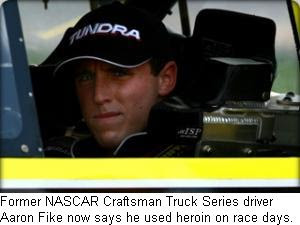 In an interview with ESPN, Fike said that at the time of his arrest in early July of last year, he had been had been using heroin for eight months, and had been dependent on painkillers for six years. He said that in the weeks prior to his arrest at the King’s Island Amusement Park, he had used heroin daily, including days when he competing in the NASCAR Craftsman Truck Series.

Fike and his fiancee were arrested on charges of possession of heroin and drug paraphernalia, and were were suspended indefinitely by NASCAR. Fike peaded guilty guilty to possession of a drug abuse instrument and a reduced charge of attempted possession of heroin in November of 2007, and was sentenced to two years of probation after agreeing to establish a non-profit anti-drug group.

He has returned to racing on the USAC Midget series, where he is tested upon arrival at the track each week. He said he has spoken with NASCAR officials about beginning the process of reinstatement, but admits that his stock car career may be over. He added that he hopes his admission of racing while under the influence of heroin will prompt NASCAR officials to rethink their drug testing policy.

NASCAR spokesman Jim Hunter said the sanctioning body is looking at the more stringent, random drug testing policies recently adopted by Major League Baseball, NFL, NBA and NHL. In his words, "Our current policy has served us extremely well. We do have discussions from time to time regarding possible alternatives, so I wouldn't rule those out.”
Posted by Dave Moody at 1:36 PM