The U.S. Army is examining it options for 2009 and beyond, and could leave Dale Earnhardt, Inc., for another team.

The Army sponsorship is a year-by-year affair, and is renegotiated at the end of each season for the next year. Sources close to the situation tell Sirius Speedway that while the Army could still return to the DEI camp next season, officials are talking to at least one other Sprint Cup Series team, including one from the Toyota camp.

Mark Martin has steered the US Army Chevrolet to a pair of Top-5 and five Top-10 finishes this season, and stands 24th in points despite running only 12 of the 15 races to date. Aric Almirola has made the other three starts in the car, with one Top-10 finish.

Kyle Kutting Back: Kyle Busch’s tripleheader weekends are apparently over. Busch said yesterday that he will not take part in this weekend’s Nationwide Series race at the Milwaukee Mile, concentrating on the Sprint Cup Series event at Infineon Raceway in Sonoma, California. He blamed the long miles involved in getting back and forth between venues, and also the fact that he is out of contention for the Nationwide championship. Busch did not rule out more Nationwide Series racing this season, but said he will also skip the October Nationwide event at Memphis Motorsports Park; the same weekend of the Sprint Cup race at Atlanta Motor Speedway. 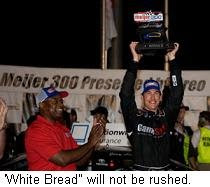 No Full-Time Cup For Logano In `09: Joe Gibbs Racing is planning to enter Joey Logano in a handful of NASCAR Sprint Cup Series races before the end of the season, but has no plans at present to move him to the senior series in 2009.

Team owner Joe Gibbs confirmed those plans yesterday, saying, "We would like to get him in some Cup stuff towards the end of the year. We want to make sure it's the good stuff, and the right way."

Gibbs also said there are no plans to move Logano to full-time Cup competition next season, saying it is already too late to start a field a fourth Cup entry in 2009. He declined to comment on the possibility of Logano replacing Tony Stewart if Stewart opts out of the final year of his contract, saying, "I don't think we've gone in that direction yet. We're still trying to work things out.”

Fellows To #01 At Infineon: Road course ace Ron Fellows will replace Rookie Regan Smith in Dale Earnhardt Inc.’s #01 Chevrolet in the Save Mart 350 at Infineon Raceway on June 22th. 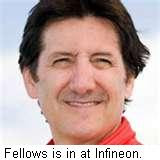 Smith is currently the top-ranking Raybestos Rookie of the Year contender, but currently stands 30th in owner points, just 30 away from falling out of the Top-35. DEI said the move is being made with an eye toward earning maximum owner points in the event, with Smith set to return to the ride the following weekend at New Hampshire Motor Speedway.

Fellows has made 17 career Cup starts, with best finishes of second at Watkins Glen in 2004 and seventh in 2003 at Infineon. Both of those finishes came in DEI cars.
Posted by Dave Moody at 12:32 PM