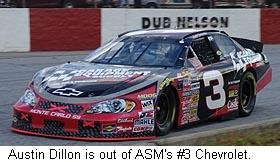 The grandson of NASCAR team owner Richard Childress ran the first four races of the year with Andy Santerre Motorsports, winning the season-opener at Greenville-Pickens Speedway when teammate and apparent winner Peyton Sellers was stripped of his victory for illegal shock absorbers. He finished sixth in the US Cellular 200 at Iowa Speedway, second in the Strutmasters.com 150 at South Boston, and 12th last weekend after a last-lap crash on the road course at Watkins Glen. He currently leads Brian Ickler by 55 points in the championship standings.

The 18-year old Dillon confirmed the split to the Boston Herald this week, saying, "This is more convenient for us. Now we're getting exactly what we want for our race program. We weren't as prepared at the racetrack as we wanted to be."

Santerre – a multi-time series champion as both a driver and car owner -- was testing today at Motor Mile Speedway in Radford, Va., and unavailable for comment. The ASM website has been purged of any mention of Dillon.
Posted by Dave Moody at 12:59 PM