Brian Vickers says he is still puzzled by the two pit road speeding penalties he received Sunday at Dover International Speedway. Vickers pitted in the third pit stall, and said he didn’t have enough time or space to exceed the speed limit before exiting the measured part of pit road. And yet, he was busted for excessive speed during green-flag stops on Lap 235, and again during a caution period just 11 laps later. 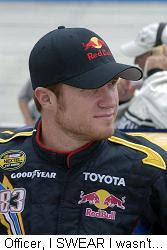 "I can't explain it," said Vickers this week. "(NASCAR) called us for speeding twice on pit road, but you know as well as I do, when you're in the last couple of boxes on pit road you can go as hard as you can, and can't speed. The second time they called us was under caution, (when) I wasn't even racing anybody. I was still in first gear, puttering along. I don't know if there's something wrong with their timing and scoring, but unfortunately it cost us a good finish."

"There's a line (at the end of pit road), and there's one more loop there at the end. You're obviously hammering it because you're gone, you think. But you're not. You're still inside that thing. We lost two laps because if it, (and) that doesn't help anything.”

Ratings Remain Strong: Sunday’s Dover race on FOX earned a 4.2 rating and a 10 share, to rank as the top-rated event of the weekend. Last year's race was rained-out and rescheduled for Monday afternoon, posting a 2.2 rating and a 7 share. Discounting the Dover race – since last year’s edition ran on Monday – NASCAR Sprint Cup racing has averaged a 5.2 rating and an 11 share through the first 13 races, even with last year’s average through 12 events.

JV Still Looking: Montreal’s La Presse says we may not have seen the last of Jacques Villeneuve, after all.

The French-language newspaper is reporting that the former F1 champion has joined with former CART team owner Barry Green and Canadian Grand Prix promoter Normand Legault to seek a sponsorship to bring him back to NASCAR. Villeneuve failed to qualify for the season-opening Daytona 500 in a Bill Davis Racing Toyota, before being released by the team due to a lack of sponsorship. The new partnership remains in need of financial backing, and is reportedly looking to align itself with another Cup team, possibly Ganassi Racing.
Posted by Dave Moody at 12:23 PM