Addington Out, Rogers In After Talladega 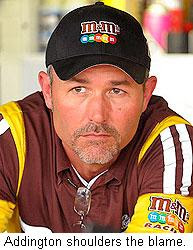 Rogers currently serves as a Joe Gibbs Racing Nationwide Series crewchief, working primarily with Joey Logano. Addington will remain atop the pit box for this weekend’s race at Talladega Superspeedway, after team management determined that there was not enough time for Rogers to take over before then.

Busch failed to qualify for this year’s Chase despite winning four races, and has just one victory in his last 21 starts, to go with nine finishes of 20th or worse. He finished fourth Sunday at Martinsville.

Sadler A Ford Man At Dega: Richard Petty Motorsports has confirmed what Sirius Speedway first told you last month; that the team will field a Ford Fusion for the first time this weekend at Talladega Superspeedway.

Elliott Sadler will wheel a #19 Stanley-sponsored Ford at Talladega Sunday, as RPM takes the next step in its planned transition to Ford power for 2010. Sadler commented on the move today, saying, "Since this is the final restrictor plate race of the season, we made the decision to run a Ford to get some work done in advance. This will be our first time to practice and work on a Fusion under real race conditions. It should help us get ready to make a strong showing at Daytona and put us in the best position to start next season.”

The Emporia, VA driver will be back in a Dodge for the final three races of the season at Texas, Phoenix and Homestead, and will join us on today's show to talk about the move.

Andretti Backs Late Caution: John Andretti says NASCAR was right to delay throwing the yellow flag when he spun on the frontstretch on the final lap Sunday at Martinsville Speedway.

"It wasn't a bad call. I wasn't in a great position, but I wasn't in an overly dangerous position,” he said. “NASCAR focuses on the race itself, and they want to see the winner come across the finish line. It's probably the call I would've made. I would've gotten out of the way if I could've, but I had a couple of issues. The car was too damaged."

Post The #66: Steve Wallace faces possible sanctions from NASCAR after running into Matt Kenseth’s car on pit road after Saturday’s race at Memphis Motorsports Park. Wallace spun after contact with Kenseth late in the race, then drove down pit road and into the side of Kenseth’s car. He was summoed to the NASCAR hauler after the race, and penalties – if any – will likely be announced later today.

Tags To Texas: Canadian driver Alex Tagliani will run the NASCAR Nationwide Series race at Texas Motor Speedway on November 7. Tagliani announced on his blog Monday that he will drive the same Dodge he ran at Montreal’s Circuit Gilles Villeneuve in August, fielded by MacDonald Motorsports. The race will mark his first career TMS start.
Posted by Dave Moody at 12:12 PM