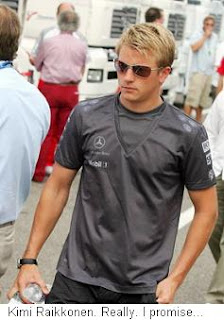 NASCAR Nation plunged into a state of collective despair today, after 2007 Formula One World Champion Kimi Raikkonen said that he can race in NASCAR next season if he wants to, but is not a fan of stock car racing.

Raikkonen is being dropped by Ferrari at the end of this season in favor of rival Fernando Alonso, and said this week he has no concrete plans for the 2010 season. Asked if he might follow the lead of former F1 stars Juan Pablo Montoya and Jacques Villeneuve into NASCAR, Raikkonen said, "I could race there if I wanted, but I'm not one of the biggest fans of NASCAR. I have no plans, I do what I want with my life.”

NASCAR fans across the country responded with a collective yawn, before failing to select Raikkonen out of a photo lineup.
Posted by Dave Moody at 1:56 PM