Move Along, There's No Story Here

Just three races into the 2010 season, the rumor mill is running full-speed ahead with speculation about Kevin Harvick, Kasey Kahne and their respective futures. Media members assail both drivers at every turn, grilling them about the final year of their respective contracts with Richard Childress Racing (Harvick) and Richard Petty Motorsports (Kahne), hoping to unearth a nugget of dissatisfaction and spawn a breathless “he’s leaving” story that will scoop the competition by months.

Talk about putting the cart ahead of the horse. 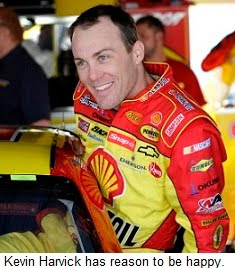 Speculation and unconfirmed reports cling to Kahne and Harvick these days like a rottweiler on a rump roast, despite repeated assertions by both drivers that no decisions -- or even negotiations -- on the topic will take place until late this year. The fact that there is no story to report hasn’t prevented people from reporting on it. In the aftermath of Sunday’s Shelby American at Las Vegas Motor Speedway, one breathless Sprint Cup scribe reported that “Kevin Harvick is considering his future and... sponsor Shell is also considering its NASCAR future.”

NASCAR’s version of the tabloid media pumps out empty column inches on Harvick/RCR and Kahne/RPM the way the National Enquirer does on Brad Pitt and Angelina Jolie. One minute a divorce is imminent. The next, they’re madly in love. And both stories are corroborated by the omnipresent “sources close to the situation.”

Harvick has stiff-armed the topic at every turn, insisting repeatedly that 2011 is not on his radar screen yet, and that the performance of his Shell-Pennzoil Chevrolet team over the course of this season will help determine his plans for the next. Kahne has been a bit more talkative, downplaying his poor finishes in the opening races of the season.

"The car has been decent,” insisted Kahne in Las Vegas. “At Daytona and (Fontana), I think we've been Top-10 cars. It's disappointing, but those things happen once in a while. I don't think our season is over. We're definitely in a hole (and) that's not very good, but we still have plenty of racing to go."

He was honest in assessing RPM’s offseason progress, saying, “I wouldn't say my car is any different than it was last year. I think the Ford engine runs a little better than what we had last year, and that's nice. But as far as… going and leading laps, or running first, second or third, we're not there. I expected the cars to be better. I think as the season goes, hopefully, (that) will be the case. But it’s not as of right now." 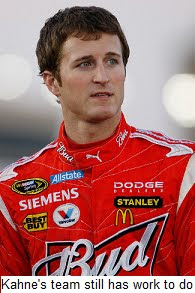 Kahne also made his stance on 2011 crystal clear for the umpteenth time, saying, “Toward the end of this year when I decide to make my decision, if I don't feel like we're going to be able to run with the Hendrick cars for the next three or four years, then I've got to make a change. If I feel like we can, then I'm going to stay right where I'm at.”

He said he plans to "sit back and watch the performance of our team (against) the Chevrolets, the Toyotas, the Fords and the Dodges and see where everybody is at. We have plenty of time to do it, so it's pretty nice to be where we're at right now.”

So, for the record, here’s the lay of the land.

Harvick leads the NASCAR Sprint Cup championship standings, after recording a seventh-place finish in the Daytona 500 and consecutive runner-up showings in Fontana and Vegas.

Kahne is mired a disappointing 23rd in championship points, but could just as easily be sitting on a trio of Top-10 finishes. A crash at Daytona ruined what appeared to be a Top-10 day, and Kahne’s own driving mistake triggered a spin that spoiled another solid outing at Auto Club Speedway. The team righted the ship with a trouble-free ninth-place finish in Las Vegas Sunday.

Harvick’s average 2010 finish of 3.67 is probably not going to make him jump ship at the end of the season. And it’s absolutely insufficient grounds to file for divorce just three races into the season.

Kahne’s start is not what he and Richard Petty Motorsports had hoped for, but is it reason to bolt the team? Not likely. At least not yet. There’s a lot of racing to be done before the final checkered flag of the season flies at Homestead-Miami Speedway in November, and a lot can change before then.

You and I understand that fact. Kevin Harvick and Kasey Kahne understand it. But don’t try and tell that to some members of the NASCAR media, who continue to pound away at a story that -– for now –- seems not to exist.
Posted by Dave Moody at 11:22 PM