Just when you begin to believe there’s no place for the little guys in NASCAR anymore, along come Max Papis, Joe Nemechek and Michael McDowell.

Against long (some would argue insurmountable) odds, Papis, Nemechek and McDowell fought their way onto the starting grid for last weekend’s 52nd Daytona 500, outrunning teams with unlimited resources, top-notch personnel and decades of experience. It was the NASCAR equivalent of the lowly Chicago Cubs sweeping a World Series title from the New York Yankees in four games, and it set a “feel good” tone that carried through to the end of SpeedWeek 2010. 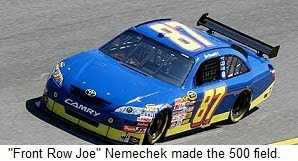 Papis raced his way into NASCAR’s greatest race with a 15th-place finish in the first Gatorade Duel at Daytona qualifier. He started 20th and made only modest progress in the early going, until veteran crewchief Robert “Bootie” Barker left Papis on the track while many others pitted for tires and fuel on lap 54. “Mad Max” did the rest, keeping himself in qualifying contention until the final lap, then making a testosterone-rich move in the fourth turn that catapulted his GEICO Toyota past three cars and into The Great American Race.

As he climbed from his machine after the race, “Mad Max” had understandably become “Glad Max,” and the tears flowed freely as he accepted congratulations from family, friends, team members and fellow drivers.

“Did you see that? Mark Martin just came to me and congratulated me,” said a beaming Papis. “He punched me in the arm and said I did a great job. I think I hugged him!
“I’ve won two Rolex 24-Hour races here, so this place means a lot to me,” he said. “Daytona means everything to me. Last year, I never would've had the opportunity to make this dream come true."

One spot ahead of Papis at the finish was Michael McDowell, who earned his inaugural Daytona 500 berth after starting 26th in his #55 Prism Motorsports Toyota. Team owners Phil Parsons and Randy Humphrey spent much of last season as start-and-park artists in the NASCAR Nationwide Series, but the same lap-54 caution flag that benefitted Papis gave McDowell the outside chance he was looking for.

"When that last caution came out, I knew we had a shot at it," he said. "Our car was really good on the short runs, and we got the pushes we needed. I picked the right line at the right time." 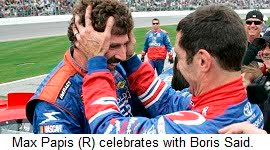 The road to the 2010 Daytona 500 has been a long one for all three drivers.
Until last week, McDowell was best known for his horrifying qualifying crash in April of 2008 at Texas Motor Speedway, while driving for Michael Watrip Racing. Since then, his NASCAR career has been a hodgepodge of rides with various teams in NASCAR’s three national series’, none offering much in the way of job security or opportunity to shine.

Papis’ seven-year journey has carried him from CART -- where he recorded three wins -- to Indy Cars, Formula One, sports cars – highlighted by the 2004 Grand Am Rolex Series championship -- and eventually NASCAR. His skill and bravado have been readily apparent at every stop along the way, but unfortunately, the outgoing Italian has rarely been able to find a team with funding to match his talent.

Nemechek once ranked as one of NASCAR’s best, but it’s been a long time since “Front Row Joe” ran up front. These days, he is forced to field his own entries in both the Sprint Cup and Nationwide ranks, racing when he can and pulling a “start and park” when he can’t. 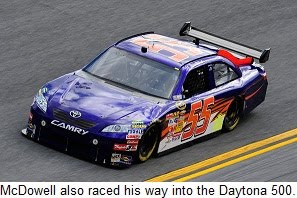 Unfortunately, none of the three drivers were able to parlay their qualifying success into strong runs on race day. McDowell finished 33rd after his car spit a driveshaft with just a handful of laps remaining. Papis finished 40th in the Daytona 500 after catching a piece of the day’s first incident on lap seven, then suffering engine failure with just 89 of 200 laps complete. Nemechek finished 43rd after getting tagged by the Dodge of Sam Hornish, Jr. – who was many laps down at the time – and crashing in the fourth turn on lap 64.

In the end, however, their final finishing positions didn’t seem to matter.

No matter where they finished Sunday, “Mad Max,” Mike and “Front Row Joe” reassured us once again that in an era of multi-million dollar, multi-car mega-teams, little guys still stand a chance.
Posted by Dave Moody at 10:24 AM