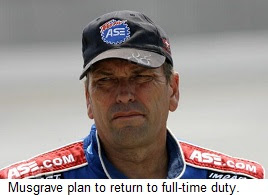 Musgrave told Sirius NASCAR Radio's Sirius Speedway with Dave Moody today that he will not race in the Truck series’ second event of 2010 at Atlanta Motor Speedway next week, and could also miss the next two races at Martinsville and Nashville.

However, he said paperwork and legalities are currently being finalized to put him back on the circuit in the near future. "It will be full time, multi-year and fully funded, and we're hopeful that it will all come together within the next six weeks," said Musgrave. "It has taken a lot of people and a lot of hard work, but it is coming together really well.”

The new deal will likely put Musgrave in a Billy Ballew Motorsports Toyota Tundra for the balance of the 2010 season and beyond, though those negotiations also have not been finalized.

Musgrave finished 31st in the season-opening NextEra Energy Resources 250 at Daytona in a Ballew-owned Toyota.
Posted by Dave Moody at 1:19 PM