Kyle Busch Motorsports General Manager Rick Ren has spent the last few weeks scrambling to rebuild his driver and sponsor lineups after team owner Kyle Busch was asked not to compete in the NASCAR Camping World Truck and Nationwide Series’ in 2012. 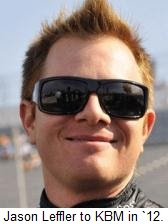 Ren and Busch had assembled a sponsor lineup that included Dollar General, Traxxas, Toyota and others for the 2012 campaign, with Busch scheduled to play a leading role in both the Nationwide and Truck efforts. Sources close to the team say virtually all the team’s sponsors signed on believing that Busch would drive their entries in a significant number of events this season, only to learn last month that Joe Gibbs Racing had asked Busch to dramatically trim his involvement in all but the headline NASCAR Sprint Cup Series.

Ren confirmed in late December there was “a high probability” of Busch withdrawing from at least the 2012 Truck Series “at the request (of JGR). Not by demand, but by request. There is (also) a possibility of him running no Nationwide races under certain circumstances, as well,” said Ren. “There are a lot of things being discussed right now, which makes it pretty tough on me. 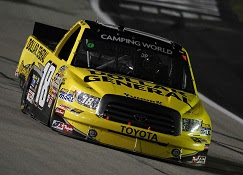 Since then, work has continued at KBM’s 77,000-square foot headquarters, with a fleet of Toyota Camrys and Tundras being assembled for the 2012 season. The team announced last week that veteran Jason Leffler will serve as primary driver of its potent, No. 18 Camping World Truck Series Toyota, driving a minimum of 14 races – beginning with the season opener at Daytona International Speedway – with sponsorship from Dollar General. KBM continues to seek sponsorship to run Leffler in the remaining eight events on the 2012 Camping World Truck Series schedule

The 36-year old Leffler is a proven commodity in NASCAR National division competition. He finished in the Top-10 in Nationwide Series points in each of the last two seasons, and has two career wins on that series. In 46 career Truck starts, the California native has one win, 19 Top-5 and 29 Top-10 finishes, with a top point finish of fourth in 2002 with Jim Smith’s Ultra Motorsports team.

"As a racer, your ultimate goal is to win races,” said Leffler. “Driving the No. 18 Dollar General Tundra for KBM is definitely an opportunity where I expect to achieve that goal. Kyle has put together a first-class organization that builds top-notch equipment. I'm honored that he has the confidence in me as a driver to come in and carry on the winning tradition that his team has established. Dollar General is one of the premier sponsors in our sport and I'm looking forward to representing them on and off the track." 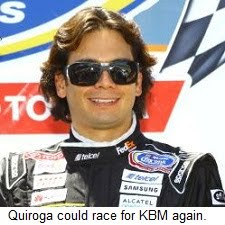 Mexican driver Germán Quiroga could also compete for KBM this season, if pending sponsorship arrangements can be finalized. Ren told NASCAR.com last week that Quiroga has “a verbal commitment” to cover most -- but not all – of the 2012 season, and has been approved by NASCAR to race in the 2012 lid lifter at Daytona. He warned, however, that time is running short for Quiroga to finalize the deal. "It is still a possibility,” said Ren. “Our negotiations have gone a lot more in-depth (and) right now he's got some verbal commitments. But we all understand in this industry what a verbal commitment means. It doesn't mean a lot.

“He's trying to finalize himself down there, and we told him that the clock is ticking. We drew a line in the sand, so to speak. We have to have an answer by such-and-such a day, or it's just going to be impossible for us to make Daytona.”

KBM is expected to announce its finalized Nationwide sponsor and driver lineups this Thursday. It is possible that Busch could compete in at least part of the Nationwide slate, but sources say he is unlikely to equal the 20 starts he made in NASCAR’s second division a year ago.
The team’s first on-track Nationwide test is scheduled for mid-February at Nashville Superspeedway.
Posted by Dave Moody at 9:50 AM