“Awesome Bill” Elliott is apparently not so awesome to the owners of Riverside Speedway in Antigonish, Nova Scotia, after the Dawsonville, Georgia, driver allegedly canceled a scheduled appearance there this weekend. 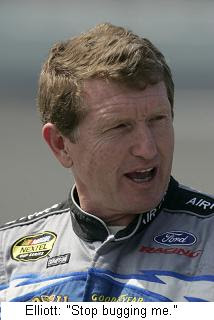 According to the speedway, Elliott had agreed to race in Friday night’s “IWK 250” Super Late Model race there, before abruptly canceling the appearance. Management says they signed an agreement in late April for Elliott to drive a locally owned Super late Model in the event, long before “Awesome Bill” agreed to take the wheel of the Wood Brothers/JTG Racing Nextel Cup Ford, replacing Kenny Schrader. They say they even paid extra for a “no-cancellation guarantee” from the former Nextel Cup Series champion.

Last Friday, however, Elliott informed the track that his plans had changed, telling them, "There is no way I am going to Nova Scotia to race that weekend. I am too busy. Now stop bugging me.’”

Apparently, folks in the Canadian Maritimes don’t take disappointment well. Riverside issued a scathing press release this week, saying Elliott, “has proven to us that he is not a man of his word, and his cavalier attitude shows he is nothing more than a prima dona. So much for Elliott's southern gentleman persona.

“We don't want this type of driver…representing our facility, our sponsors or our race fans,” it said. “If we had any idea Elliott was that kind of person, we would never have approached him, but instead chosen a Cup driver that understands a deal and the seriousness of his actions.”

The track also posted a poem entitled, “The New Bill Elliott” on its website. It read:

He doesn't think much of his fans in Atlantic Canada.
He let them down.

He doesn't think much of track promoters.
He let them down.

He doesn't think much of the IWK Sick Children's Hospital.
He let them down.

He doesn't think much of his management company.
He let them down.

He doesn't think much of the young cancer patient from Port Hawkesbury who wanted to meet his hero.
He let him down.

He doesn't think much of making a no-cancellation commitment.
He let himself down.

I wonder what the present members of the Motorsports Hall of Fame think?
Will he let them down?

John Chisholm, owner of Riverside Speedway, said, "I'm bewildered and saddened by Bill's change in commitment to his fans, some of whom are traveling great distances to see him here. Bill has always emphasized his enthusiasm for getting back to his roots by racing at local tracks to support the fans who've made him so popular. He's let us all down."

The track says it is working to find another big-name driver from the NASCAR ranks to replace Elliott, but has had no luck in doing so.
Posted by Dave Moody at 11:49 AM