Bill Elliott has responded to allegations that he reneged on an agreement to appear in a Super Late Model race at Nova Scotia's Riverside International Speedway next Saturday. 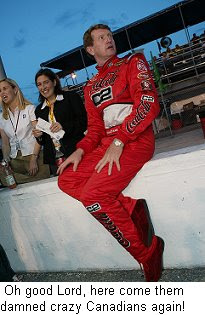 "I steadfastly deny that there was ever a final contract, spoken or written, in which I agreed to both attend and compete in the event at the Riverside International Speedway," said Elliott today. "Riverside International Speedway officials contacted my representatives in April 2007 to gauge my interest in competing in this event. Race officials sent a lengthy appearance schedule in conjunction with the event. Although my family and I strongly considered attending the event, on May 15th we communicated to race officials that we were leaning against attending, due in large part to the excessive amount of travel time the commitment would involve.