Notes From The Nextel Cup Garage 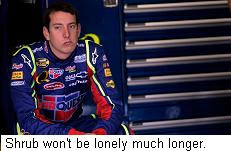 Kyle Busch is keeping mum on his future plans, but it appears his list of potential 2008 employers is now down to four. Richard Childress Racing, Evernham Motorsports, Dale Earnhardt, Inc. and Joe Gibbs Racing. Our sources tell us that it’s probably down to DEI and RCR at this point, with a possibility of Busch running Nextel Cup races for DEI next season, and Busch races for RCR.

Team owner Rick Hendrick quashed rumors that Busch will be released from the #5 Chevrolet before the end of this season, pointing out that the team is currently qualified for the Chase For The Nextel Cup, and solidly in championship contention. However, he admitted frustration with Busch’s recent criticism of his Hendrick Motorsports teammates, saying, "It just doesn't make sense to me. We're working as hard as we can."

Hendrick’s PR staff is refusing virtually all interview requests for Busch these days, but once he arrives at the racetrack, he is a prime (and apparently willing) target for the media hordes. Contrary to published reports, agent Jeff Dickerson said Busch is not close to signing a deal, and will have nothing to announce at Indy next weekend.

Ginn Shakeup Could Come Today: As we first reported yesterday, Aric Almirola will jump from Joe Gibbs Racing to Ginn within the next few days, replacing Regan Smith as part-time driver (along with Mark Martin) of the #01 U.S. Army Chevrolet. Smith will move to the #14 Chevrolet for the remainder of the season, replacing Sterling Marlin.

Both Marlin and Joe Nemechek are expected to be pick-slipped this week (in fact, it may have already happened), as Ginn scales back to a two-car operation for the remainder of the season.

CEO Jay Frye has had little luck attracting sponsorship for his two veteran drivers, and when a seemingly airtight deal with Panasonic fell apart at the beginning of the season, the team found itself in a major sponsorship crunch. Both Nemechek and Marlin ran with plain black quarterpanels recently at New Hampshire International Speedway, and the odds of finding additional backing for Nemechek (age 44) and Marlin (50) are not encouraging.

Sources say Smith will be moved to the #14 Chevrolet at Indianapolis Motor Speedway in two weeks, while the #13 will be sold to Dale Earnhardt, Inc., which covets the car’s Top-35 standing in owners’ points for driver Paul Menard.

Back To The Future For BAM: Beth Ann and Tony Morgenthau hope a dose of nostalgia will be just what the doctor ordered for their struggling NASCAR Nextel Cup Series team.

BAM Racing has announced that former crewchief David Hyder will return to the fold this week, reuniting with former driver Kenny Schrader.

Schrader has been on the Nextel Cup sidelines since being replaced in the Wood Brothers/JTG Racing Ford by Bill Elliott a few weeks ago. He will reunite with Hyder at BAM, beginning at the Brickyard 400 in two weeks. Hyder – the undeclared scapegoat of the Michael Waltrip Racing “fuelgate” controversy at Daytona – had a quick cup of coffee with Jeremy Mayfield’s Bill Davis Racing team before heading back to BAM this week.

"I'm going to build a team from the ground up," said Hyder of his return. "I want to put all the right pieces together." 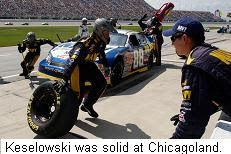 Despite battling an ill-handling racer from the drop of the green flag, Keselowski was the top-finishing rookie of the race. He has two more confirmed starts with JR Motorsports; this Saturday at Gateway International Raceway, and at O'Reilly Raceway Park next weekend.

Keselowski is the third driver to wheel the JR Motorsports NAVY car in the last two seasons, after Shane Huffman was unceremoniously fired two weeks ago. Huffman was 13th in Busch Series points – fifth among “Busch only” drivers -- leading some to wonder whether expectations in the JR Motorsports camp are unrealistically high at present. Earnhardt himself drove the NAVY car at Daytona, but managed only a 14th place finish after battling chassis issues of his own.
Posted by Dave Moody at 11:54 AM