Almirola To Sign With Ginn, Nemechek And Marlin On Chopping Block 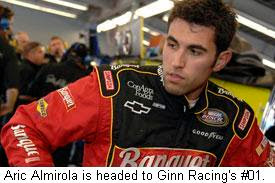 Sirius Speedway has learned that Aric Almirola has requested a release from Joe Gibbs Racing, and will move within the next few days to a new position with Ginn Racing, sharing the #01 US Army Chevrolet with veteran Mark Martin. Almirola is currently under contract with JGR, but will replace Regan Smith in the #01 Chevrolet, with Smith moving to full-time Nextel Cup status.

Almirola has 53 career starts in the Nextel Cup, Busch and Craftsman Truck Series, and was credited with his first career Busch Series victory in July at the Milwaukee Mile, when he started the race, only to be pulled from the car in favor of eventual winner Denny Hamlin.

Ginn Racing has had no official comment on the story, but CEO Jay Frye admitted yesterday that changes are afoot. The team recently laid off a number of employees from its Busch Series operation as part of a “re-evaluation process,” a process that includes "hibernating" the Busch team, possibly for the remainder of the season. He said reports that Ginn will sell the #13 Nextel Cup team are erroneous, but that sponsorship remains a major concern.

"We have no intention to shut it down," said Frye of Nemechek's team. "But there comes a point that you have to get it funded. It has to get fixed this year, no doubt. I'd rather be a strong two-car team than a three-car team without a sponsor."

Frye hinted that Smith will see more Nextel Cup laps in the second half of the season, a move that does not bode well for Marlin and Nemechek. In fact, sources tell Sirius Speedway that neither driver will be re-signed when their contracts expire at the end of the season, and that one of them may actually receive his walking papers within the next few days. Martin and Almirola will then split time in the #01 Chevrolet for the remainder of the year, with Smith taking over the #13 or #14 Chevrolet full-time.

"Hopefully, two or three years from now we'll have three or four 20-something guys in the cars," said Frye. 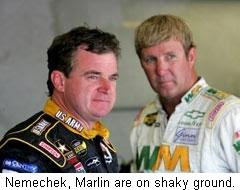 Frye said results of the team’s internal re-evaluation could produce a driver change as soon as next weekend at Indianapolis Motor Speedway, and sources tell Sirius Speedway that Nemechek, Marlin or both could be released as early as Tuesday. Nemechek is currently 33rd in Nextel Cup points with just one Top-10 finish – a ninth in the season-opening Daytona 500 -- and one DNQ. Marlin stands 29th, with a best finish of 13th at Darlington.

In a related story, despite widespread reports of a possible merger between Ginn Racing and Dale Earnhardt, Inc., sources close to the situation say a more likely scenario involves the sale of one Ginn team (either the #13 or #14) to DEI, with the two operations remaining independent. Merger talks between the two organizations have been ongoing for some time, but DEI owner Teresa Earnhardt has reportedly been unwilling to pull the tigger and finalize the deal.
Posted by Dave Moody at 7:06 PM