Dario Franchitti's NASCAR career is on hold for now, due to contractual commitments to his former IndyCar team, Andretti Green Racing. 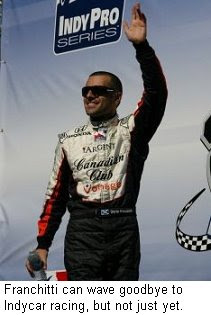 The 2007 IRL champion had hoped to begin testing stock cars with Chip Ganassi Racing this week, in an effort to run the full 2008 NASCAR Sprint Cup Series. However, Franchitti remains under contract with Andretti-Green, and is obligated to run at least one more race for them; the Petit Le Mans at Road Atlanta on October 6th. That race runs the day before an ARCA event at Talladega Superspeedway; a race Franchitti had hoped to run for Ganassi.

The Scotsman is currently scheduled to run an Andretti-Green owned LMP2 Acura at Road Atlanta with brother Marino Franchitti and Bryan Herta, and while Road Atlanta and Talladega are less than 150 miles apart, schedule conflicts will make running both races difficult, if not impossible.

AGR officials have apparently declined to release Franchitti from his contract early, meaning that he is forbidden to drive for anyone but them. Ganassi’s ARCA team tested at Talladega Tuesday, with Bryan Clauson at the wheel in place of Franchitti.

Contract snafus are not new to Ganassi, who went through a similar tug-of-war late last season in an attempt to get Juan Pablo Montoya some late-season stock car starts.
Posted by Dave Moody at 1:00 PM