Rudd Hurt In California, Wallace To Be Tabbed For Fill-In Role?

Ricky Rudd suffered a shoulder injury during a six-car pileup on lap 181 of last night's Sharp Aquos 500 at California Speedway. 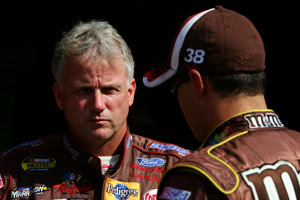 Rudd climbed into an ambulance and was transported straight to Yorba Linda University Medical Center for evaluation, bypassing the track’s Infield Care Center. While NASCAR officials said he was treated and released, PR representative Jessica Rohlik confirmed Monday that Rudd has a separated left shoulder, and will see his personal physician early this week in Charlotte, NC. She said no decision has been made concerning his ability to race at Richmond International Raceway this coming Saturday night. If he is not able to go, Kenny Wallace is believed to be the leading candidate to replace him. Wallace was scheduled to meet with team owner Robert Yates yesterday to discuss replacing the retiring Rudd in the #88 Ford next season.

Keselowski was caught-up in a four-car incident with AJ Allmendinger, JJ Yeley and Eric McClure that saw his car nearly overturn before bursting into flames ariding the top of the SAFER barrier for nearly 200 yards.

He emerged from his demolished racer favoring his left leg, but was treated and released from Loma Linda University Medical Center after CT scans and x-rays of his left ankle and chest were apparently negative. He is scheduled to be examined today in Charlotte, NC by neurosurgeon Dr. Jerry Petty after impact marks were found on his helmet following the crash.

If you haven't seen the crash yet, you can check it out HERE.

New Majority Owners At Hall Of Fame: Two executives of the Arizona Diamondbacks have purchased a majority stake in Hall Of Fame Racing from Troy Aikman and Roger Staubach.

Jeff Moorad, Chief Executive Officer of the Diamondbacks, and Tom Garfinkel, the team’s Chief Operating Officer, were introduced as the new controlling owners of Hall of Fame Racing yesterday at California Speedway. Aikman and Staubach will remain involved as minority owners.

There is no word on whether the team will continue its relationship with Joe Gibbs Racing next season, after JGR announces its move to the Toyota camp Wednesday. Hall of Fame Racing General Manager Philippe Lopez said the team has not yet decided how to proceed, and could remain with Chevrolet by forming an alliance with a team like Richard Childress Racing or Hendrick Motorsports.

In other ownership news, Texas Rangers and Dallas Stars owner Tom Hicks attended yesterday’s race at California Speedway as a guest of Richard Childress. Hicks called the invitation “social,” and declined say whether he may be interested in investing in a NASCAR team. He is also the co-chairman of the Liverpool Football Club, along with new Gillett-Evernham Mototrsports majority owner George Gillett.