Reutimann: Busch Ride Could Be Dealbreaker With MWR

If David Reutimann elects not to re-sign with Michael Waltrip Racing’s Nextel Cup team, it may be because of a disagreement over his 2008 Busch Series schedule. 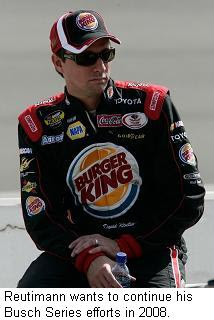 MWR finally handed Reutimann a contract proposal for 2008 and beyond last week, but Reutimann says a major stumbling block to the deal is Waltrip’s desire to put another young driver in his Busch Series Toyotas next season, rather than Reutmann.

"I know they have to plan for the future," said Reutimann yesterday. "Michael is not going to drive forever, and neither is D.J. They need to bring somebody into the company they can develop, but at this point, I'm not ready to step out of the Busch car."

Reutimann is currently second in Busch points behind runaway leader Carl Edwards, and has said repeatedly that the laps he runs in Saturday Busch Series competition have been a major bonus to his Sunday Nextel Cup efforts.

The rookie driver is currently 20th in Nextel Cup points, having qualified for 20 of the 28 races this season. Teammates Waltrip and Jarrett have combined for just 27 starts between them -- nine for Waltrip and 18 for Jarrett -- and six of DJ's starts came courtesy of NASCAR's Past Champion's provisional.

Reutimann says he has talked to other teams about openings for next season, something he says has been done with Waltrip's blessing. "I've gone to Michael and asked him to be able to talk to people, and Michael being the guy that he is, he has allowed me to do that. (But) it's not a situation where I'm running around trying to talk to everybody."

Reutimann's name has been linked with a possible fourth team out of the Richard Childress Racing stable, though Childress said today that hopes for that fourth entry are fading fast.

"We're working on it, but right now we're about at the point of no return," he said. "It isn't looking really good right now. There are opportunities out there, but none that we want to pursue. I'd rather hold off a year and make sure that we get the right combination."

Michael Waltrip Racing General Manager Ty Norris admitted that his team is having similar trouble in its attempt to re-sign Reutimann's sponsors; Dominos and Burger King. “We have our work cut out for us," he said. "Those two companies are still having internal discussions regarding the level of their involvement in NASCAR next year. Until they make a decision, we don’t know what part we play.

“Obviously, we are talking to a lot of people about primary sponsorships, because we don’t know where this is going to land.”
Posted by Dave Moody at 1:02 PM