Special Memories Of A Special Racer 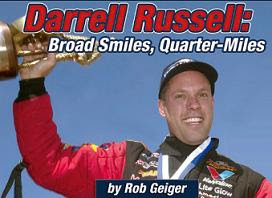 Nobody was closer to Darrell during his time at the wheel of Joe Amato's dragster than Geiger, until the tragic day in 2004 when Russell lost his life in a savage crash at Gateway International Raceway. In Darrell Russell: Broad Smiles, Quarter-Miles, Geiger tells the life story of his fellow Texan; from his boyhood years in Houston to his life in the fast lane on the NHRA Powerade Drag Racing Series.

The book is filled with behind-the-scenes stories of Russell's life -- both on and off the racetrack -- including some emotional memories from Russell's widow, Julie, who shares a side of her late husband that only she knew. The book also features exclusive interviews with Russell's close friends and teammates on the NHRA circuit, and Geiger's personal, first-person account of the crash that claimed his friend's life.

"I wanted to put down in words the kind of person Darrell was, as a friend, a brother, a son, a husband and a drag racer," said Geiger. "He was an awesome individual, probably the kindest person I've ever met. The guy simply didn't have a mean bone in his body. He was incapable of saying or doing anything negative.

"After he died, I realized that he touched so many people in his life, and that they all felt the same way that I did. Everyone loved the guy, and I wanted to capture that so we never let our memories of Darrell fade away."

The book is already receiving rave reviews from around the motorsports community. ESPN Drag Racing analyst and former driver Mike Dunn said, "I thought I would take a week and read it in my spare time, but once I started, I could not put it down. We always knew Darrell was a great person, and now I know why. This is an absolute must-read, whether you’re a race fan or not."

The book is available for $24.95, exclusively at JEGS.com. One hundred percent of the proceeds will be donated in Russell's name to DRAW, the Drag Racing Association of Women, a non-profit charity that helps injured racers and their families.
Posted by Dave Moody at 11:11 AM